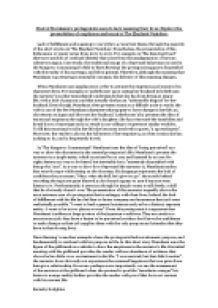 Most of Murakamis protagonists seem to lack meaning their lives. Explore the presentation of emptiness and ennui in The Elephant Vanishes.

ï»¿Most of Murakami’s protagonists seem to lack meaning their lives. Explore the presentation of emptiness and ennui in The Elephant Vanishes. Lack of fulfillment and meaning to one’s life is a recurrent theme through the majority of the short stories in ‘The Elephant Vanishes’. Nonetheless, the presentation of this listlessness or ennui varies from story to story. For example, in ‘The Dancing Dwarf’ there are symbols of confused identity that come from the amalgamation of various cultures in Japan. Conversely, the traditional image of a depressed Salaryman is used in the Kangaroo Communiqué while in ‘Barn Burning’ the protagonist appears dissatisfied with the reality of his marriage, and life in general. Therefore, although the meaning that Murakami is portraying is invariably constant, the delivery of this meaning changes. ...read more.

Moreover, the reader is shown the full extent of her emptiness, as when it rains she has nothing to do, and is desperately bored. In ‘The Kangaroo Communiqué’ Murakami uses the idea of ‘being perceived’ as a way to show the discontent in the central protagonist’s life. Murakami’s present the narrator as a single entity, which is noticed by no one, and listened by no one. He rights letters as a way to be heard, but inevitably he is “extremely dissatisfied with being who I am”. As a way to show how depressed the narrator is, Murakami makes him record a tape while sitting on the doorstep. His language represents the lack of confidence he possesses, “Okay, what the h**l, let’s give it a go”, the motifs behind recording the tape are quite blurred, as he doesn’t appear to care if anyone even listens to it. ...read more.

?Barn Burning? is another example where the protagonist lacks excitement, purpose, and fundamentally is confused with his purpose in life. In this short story Murakami uses the figure of the girlfriend as a vehicle to show the emptiness in the narrator?s life. His initial meeting with the girlfriend provides the reader with an abundance of evidence that shows he has little or no contentment in his life. ?I was married, but that didn?t matter?, the narrator does obviously not experience the assumed happiness that one gains from being in a relationship. However, perhaps more importantly, we see the amazement of the narrator at the girlfriend when she pretend to peel the ?mandarin oranges? his desire to escape reality further provides the reader with proof that he is not content with his current life. Barnaby Hodgkins ...read more.