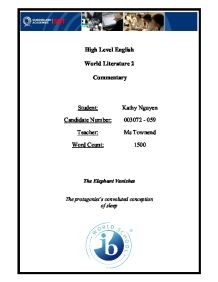 Sleep is a short story set in Japan from Haruki Murakamis anthology, The Elephant Vanishes. The passage chosen for commentary is extracted from Sleep and involves a female protagonist. Located on my page 105 to 106 of the anthology, the action in the p

The protagonist reinforces the idea of escapism when she expresses "Maybe death is a kind of rest" (31) from reality. However the word "maybe" position readers to recognise that the protagonist is still filled with ambiguity and she also struggles to come to terms with her current physical state. Like all of Murakami's works, he effectively presents his characters as shifting effortlessly between the surface reality of a conventional, modelled life and the sensitized imagination. Murakami presents the protagonist from Sleep, trapped in her thoughts and cannot return back to reality. Murakami further confirms the protagonist's ambiguous frame of mind by writing, "Death can be anything at all" (33), which consequently sends the protagonist back to where her thoughts initially began. By distinctively presenting this passage as circular in structure and setting transitions between key notions and tones of the passage, Murakami emphasises the protagonist's circling thoughts and concepts of sleep. In the first paragraph of the passage Murakami gives readers an overview of the protagonist's condition, positioning readers to understand that the protagonist's "sleeplessness" (6) has been occurring for "seventeen days and seventeen nights" (8). The use of repetition and the short length sentences in these lines develops an emphatic and intense tone. ...read more.

(42-43). By climaxing with the question "what should I do", Murakami highlights and reinforces the subject of vagueness and complexity for the protagonist has been running in circle of thoughts all this time. In reflection to the Japanese themes and Murakami literature works, Murakami purposely writes Sleep to point out not only how much society does not know but moreover how much society cannot know. Sleep is one of the post modern short stories from Haruki Murakami contemporary Japanese fiction, The Elephant Vanishes. Within the passage extracted from Sleep, Murakami displays the female protagonist's complicated mindset and her struggle to grasp her indistinct thoughts. The protagonist forces herself to evaluate her circle of thoughts, all of which involves the parallels of sleep, death and escapism. Murakami develops a model of encircling ideas of sleep, death and escapism by manipulating the structure of the passage and in addition, utilising literary devices such as symbolisms, tone, diction and repetition. As a result of the structure of the passage and the utilisation of various literary devices, Murakami allows readers to comprehend the protagonist's 'circle of thoughts' and emphasises that the protagonist's ideas are all indefinable. ...read more.