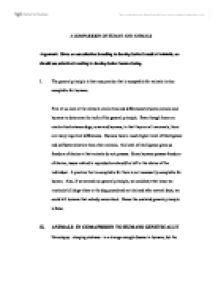 A comparison of humans and animals

A COMPARISION OF HUMAN AND ANIMALS Argument: Since we use selective breeding to develop better breeds of animals, we should use selective breeding to develop better human being. I. The general principle is that any practice that is acceptable for animals is also acceptable for humans. First let us look at the relevant similarities and differences between animals and humans to determine the truth of the general principle. Even though there are similarities between dogs, cows and humans, in that they are all mammals, there are many important differences. Humans have a much higher level of Intelligence and self determination than other animals; this level of intelligence gives us freedom of choice at that animals do not possess. Since humans possess freedom of choice, issues related to reproduction should be left to the choice of the individual. A practice that is acceptable for them is not necessarily acceptable for human. Also, if we extend our general principle, we could say that since we routinely kill dogs taken to the dog pound and not claimed after several days, we could kill humans that nobody cares about. ...read more.

There are something like 380 inherited diseases which have been recognized in dogs. Many of these are exact analogues of human disease. "For instance, retinitis pigmentosa in man, a blindness condition, is essentially progressive retinal atrophy in dogs. There are something like 25 RPs in man and six or 7 RPA's in dogs." "Copper toxicosis in Bedlington Terriers, which eventually causes liver failure, is like Wilson's disease in man, although it is not the same gene. It is sometimes hard to collect large enough pedigrees for genetic studies of rare diseases in humans - but in animals you can produce large pedigrees, identify the genetic regions and see if these regions are also involved in the rare conditions in man." "In terms of DNA sequence, dog and man are 85 per cent identical. There are many large evolutionarily conserved segments. There's more in common than there are differences in the structure of a mammal," he said. Together with Dr Jim Kaufman, of the Institute for Animal Health, the researchers have made a surprising discovery - the chicken barely has enough immune system genes to keep itself alive. ...read more.

That is, I realize that I'm conscious, that I have ideas but I also realize that you are conscious. And so I can think about what you think. I can think about what you know; I can think about what you are ignorant of. Morality Third, we have the capacity for true morality -which is based on having the concept of right and wrong. Social Structures Fourth, language gives us the capacity to form social structures. Now, animals have social structures , but not as complex as ours. We, for example, can write bylaws and laws and constitutions.. Awareness of Mortality Fifth, we have the capacity to anticipate death. Religious Sensibilities Sixth, we have the ability to ask questions about what is ultimately important; that is, we can ask about the ultimate cause of everything; we can ask about whether the whole has a purpose. And, in short, we are able to ask what's traditionally been understood as religious questions. ...read more.