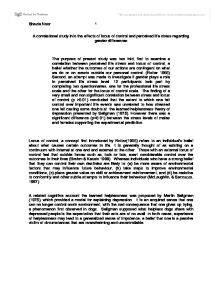 A correlational study into the effects of locus of control and perceived life stress regarding gender differences.

A correlational study into the effects of locus of control and perceived life stress regarding gender differences The purpose of present study was two fold, first to examine a correlation between perceived life stress and locus of control, a belief whether the outcomes of our actions are contingent on what we do or on events outside our personal control. (Rotter 1966) Second, an attempt was made to investigate if gender plays a role in perceived life stress level. 12 participants took part by completing two questionnaires, one for the professional life stress scale and the other for the locus of control scale. The finding of a very small and non significant correlation between stress and locus of control (p >0.01) concluded that the extent to which one felt control over important life events was unrelated to how stressed one felt casting some doubts at the learned helplessness theory of depression presented by Seligman (1975). However there was a significant difference (p<0.01) between the stress levels of males and females supporting the experimental prediction. Locus of control, a concept first introduced by Rotter(1966) refers to an individual's belief about what causes certain outcomes in life. It is generally thought of as existing on a continuum with internal at one end and external at the other. ...read more.

Individuals adapt to stressful situations by using coping strategies and defence mechanisms. The present study was carried out to analyze the strength and direction of the relationship between subjective stress and locus of control measured by self report questionnaires. It was also aimed to test the prediction that there will be gender differences in the prevalence of stress. Method Design A within group design was used for the main correlational study with a self report measure of locus of control and a self report measure of life stress. The secondary part of the study had a between subject design. A comparison was made between males and females on the life stress measure. Participants The participants were five male and seven female (12) first year students at Burnley College who volunteered for the experiment in order to fulfil a class requirement. Their ages were approximately between 25 - 35 years. Materials Two questionnaires were used, the professional life stress scale and the locus of control scale (modification of Rottet's original scale). Pre printed instructions and procedure to score questionnaire were also supplied with both scales. (appendix 1) There were 20 questions for locus of control and 22 for life stress control. ...read more.

It means that how life stressed people feel is unrelated to whether they tend to see the factors that determine the course of important events in their lives as residing inside or outside of themselves. However the second part of the study revealed that there is significant difference between the stress levels of males and females supporting the experimental prediction. The findings cast some doubts at common understanding that females are more stress prone than males (Frazier, Schauben 1994), as in present study males mean rank was higher than females. Some extraneous factors were controlled for by giving all the participants the same questionnaire in the same room, the same time of day, and by the same person. Other possible extraneous factors such as age, race and social status could not be controlled. Possible limitations to the internal validity of this study might have been participant personality traits such as determination or beliefs and faith, which might have affected how they responded. An interesting idea for future research would be to study different cultures to see if diverse backgrounds and cultures play a role in the area of the locus of control. Another topic of interest for future research might be to study stress and gender differences in the same age group. ...read more.