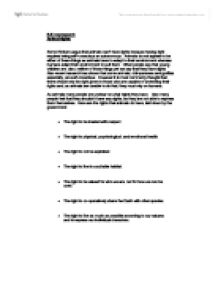 R.E coursework Animal rights Some thinkers argue that animals can't have rights because having right requires being self-conscious an autonomous. Animals do not appear to be either of these things as animals have to adapt to their environment whereas humans adapt their environment to suit them. Other people say that young children are, also, neither of those things yet we say that they have rights. Also recent research has shown that some animals, chimpanzees and gorillas especially, are self-conscious. However it is most commonly thought that there should only be right given to those who are capable of protecting their rights and, as animals are unable to do that, they must rely on humans. As animals many people are unclear on what rights they have. Also many people feel that they shouldn't have any rights, as they are not able to express them themselves. Here are the rights that animals do have, laid down by the government. * The right to be treated with respect. * The right to physical, psychological, and emotional health. * The right to not be exploited. * The right to live in a suitable habitat. ...read more.

All Christians agree that animals are part of god's creation and that humans have duties towards animals. Most Christians believe that humans shouldn't be cruel to animals and that farmers should care for their livestock, that animals for food should be slaughtered without pain and that animals should only be used for scientific experiments when absolutely necessary. However they believe that humans have a right to use animals for food do experiments on them which are aimed at improving human health or testing new drugs, toiletries and foods for health and safety reasons. They believe this because god is the creator of animals as well as humans. They believe god gave humans the right to control animals. They believe animals do not have rights since only humans can have rights because they are the only beings made in the image of god and they believe that humans have a duty to care for animals because of their duty as stewards of gods creation. Some Christians are vegetarians and are opposed to animals being used for food or experiments. They also oppose the hunting of animals and fishing. ...read more.

But there are substitutes for that and these are often a lot healthier all round. I also would not expect many people to give up dairy products as the calcium is vital to our health and it is also very commonly used. I therefore do not think that everyone should stop eating meat (unless it is their personal choice to do so) however I do think that the way the animals are killed should be a painless way and the animal should go through no suffering. I also think that killing animals for sport (for example fox hunting) should be abolished, as this is a cruel, unjust thing to put an innocent animal through. I do believe that animals should have rights - they should have the same rights as humans. I think this because we live in a world where we all depend on one another. Humans could not survive without plants and animals just as they could not survive with out us. We all live equally dependant on something else - a child for its mother - a cow for its farmer there fore we should treat every living thing as our equal and grant it rights as equally as we grant them unto ourselves. ...read more.