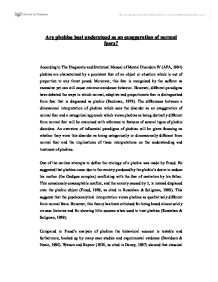 Are phobias best understood as an exaggeration of normal fears?

Are phobias best understood as an exaggeration of normal fears? According to The Diagnostic and Statistical Manual of Mental Disorders IV (APA, 1994) phobias are characterised by a persistent fear of an object or situation which is out of proportion to any threat posed. Moreover, this fear is recognised by the sufferer as excessive yet can still cause extreme avoidance behavior. However, different paradigms have debated the ways in which normal, adaptive and proportionate fear is distinguished from fear that is diagnosed as phobic (Rachman, 1978). The differences between a dimensional interpretation of phobias which sees the disorder as an exaggeration of normal fear and a categorical approach which views phobias as being distinctly different from normal fear will be examined with reference to features of several types of phobic disorders. An overview of influential paradigms of phobias will be given focusing on whether they view this disorder as being categorically or dimensionally different from normal fear and the implications of these interpretations on the understanding and treatment of phobias. ...read more.

The behavioral theory has subsequently been expanded to incorporate the possibility of the phobia being learnt through vicarious experience (Bandura & Rosenthal, 1966, as cited in Davidson & Neale, 1990). However, Seligman's (1971, as cited in Davey, 1997) theory of Preparedness incorporated these findings with Marks' (1969, as cited in Davidson & Neale, 1990) research suggesting that humans tend to be afraid of certain objects, whether at a phobic or normal level. Seligman (1971) suggested that evolutionary pressures have predisposed humans to be afraid of objects and situations that would have threatened the survival of our ancestors (those that are "phylogenetically relevant"). These stimuli, when pared with a noxious event would easily produce a phobia. This could be interpreted as an extension of normal fear as it is an exaggerated response to stimuli that humans are predisposed to fear and that are also feared at socially acceptable (normal) levels in the non-clinical population. One particular feature of certain phobias that is hard to reconcile with the preparedness account is the fear people develop towards spiders and small animals even though they are not phylogenetically relevant. ...read more.

found that the disorder was not purely the result of an exaggerated normal fear. Instead, during therapy when anxiety of the school situation had markedly decreased, operant reinforcers such as attention from the parents and therapists maintained the phobic avoidance. Although conditioning, whether operant, classical or vicarious is frequently put forward as part of a phobia acquisition mechanism, aspects of certain phobias may not be related to these paradigms or even to a concept of fear. Blood-Injection-Injury, although classed as a simple phobia, has often been considered atypical due to the unusual symptom of emotional fainting at the sight of the phobic object (Page, Bennett, Carter, Smith & Woodmore, 1997). Evolutionary hypotheses interpret this as a reflex reaction, which could be similar to that of freezing or death feigning in animals (Marks, 1988; Marks & Nesse, 1994, as cited in Davey, 1997). Equally, it could be seen as a protective mechanism against blood-loss on injury as fainting slows the circulation (Thyer, Himle & Curtis, 1985; Barlow, 1988, as cited in Davey, 1997). Both of these evolutionary hypotheses suggest a non-fear element to the symptoms of certain phobias and so cannot be seen as an extension of normal fear. ...read more.