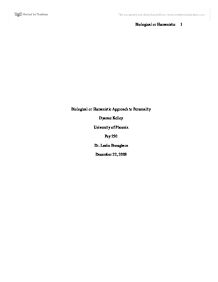 Both biological and humanistic factors have influences on ones personality development. One major issue that arises in this discipline is nature vs. nurture.

Biological or Humanistic Approach to Personality Dyanne Kelley University of Phoenix Psy 250 Dr. Leslie Brougham December 22, 2008 Biological or Humanistic Approach to Personality There are many similarities and differences in the biological and humanistic approaches to personality. Over time there have been theories that many people both agree and disagree with. Both biological and humanistic factors have influences on one's personality development. One major issue that arises in this discipline is nature vs. nurture. This is the notion that an individual's development is based on either their genetic makeup (nature) or their interaction with the environment (nurture). As opposed to history, modern psychologists rarely take the extreme positions in this matter. The question of nature vs. nurture question has been since the beginning of psychology. Those who believe the biological approach to personality believe that one's personality traits are largely influence by biological or genetic factors (Burger, 2008). One theorist, Hans Eysenck's, introduced a model of personality with three dimensions: extroversion-introversion, neuroticism, and psychoticism. He argued that these biological temperaments influence a person's personality. ...read more.

I too believe that we are responsible for our own destiny. We have the ability to make decisions according to different situations and what we believe in. Most of the time, we are not forced to make the decisions we make. I also agree with Abraham Maslow that our lower level need must be met in order to fulfill our higher level needs, but not necessarily 100%. I do not agree that a person can be molded into whatever someone wants them to be because both biological and humanistic factors will affect different traits. According to Maslow's hierarchy of needs, there are five basic categories of needs that must be met and how well they are met affects one's personality. The five categories are as follows: 1) physiological - needs such as hunger, thirst, air; 2) safety - needs such as freedom from fear/chaos and stability; 3) belongingness/love - need for friendship and love; 4) esteem - need for admiration; and 5) self-actualization - the need to become everything one is able to become. ...read more.

I have some personality traits that I also see in my family, but I think that most of my personality comes from things that I have experienced and accomplished. I act, or react, the way I do based on the situation I am in and what I think is right. I am also a strong believer in personal growth. When I accomplish something, I am not finished. I then start thinking about how to do it better the next time. This is especially true when the goal that I have accomplished is a personal goal. I have the drive to be the best that I can be. All in all, both biological and humanistic factors influence the way personality develops. Both theories have made enormous attributes to the history of personality. Some personality traits are inherited and some are developed over time and are often influenced by the environment a person lives in. It is not necessarily which approach is right, rather how much each approach influences our personalities. Many experiences throughout one's lifespan, good or bad, will continually affect how they continue to grow. Although I am more tilted toward the nurturing aspect, the importance of our genetic make-up shouldn't be minimized in one's human development. ...read more.