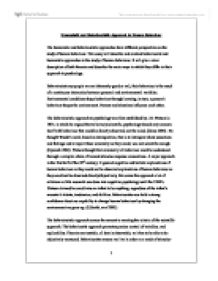 Humanistic and Behaviouristic Approach to Human Behaviour The humanistic and behaviouristic approaches have different perspectives on the study of human behaviour. This essay will describe and contrast behaviourist and humanistic approaches to the study of human behaviour. It will give a clear description of both theories and describe the main ways in which they differ in their approach to psychology. Behaviourists say people are not inherently good or evil; their behaviour is the result of a continuous interaction between personal and environmental variables. Environmental conditions shape behaviour through learning, in turn; a person's behaviour shapes the environment. Persons and situations influence each other. The behaviouristic approach to psychology was first established by J.B. Watson in 1913, in which he argued that to be truly scientific, psychology should only concern itself with behaviour that could be directly observed, not the mind, (Gross 2005). He thought Wundt's work, based on introspection, that is to introspect about sensations and feelings and to report these accurately as they could, was not scientific enough (Eysenck 2004). Watson thought that eventually all behaviour could be understood through a complex chain of learned stimulus response connections. A major approach in the first half of the 20th century, it ignored cognitive and holistic explanations of human behaviour as ...read more.

(Sternberg 1995) The behavioural theory has led us to see human actions as reactions to specific environments, and has helped focus on how environments control our behaviour and how they can be changed to modify behaviour. As in the case of pavlov's study above, it shows how we seem to be shaped primarily by forces beyond our control. However, humanistic theorists do not believe that it is sufficient to define mental health as simply an adaptation to the environment. The humanistic approach was founded as an alternative to psychoanalytic and behaviouristic approaches. (E.Smith, et al 2003). It largely rejects the scientific method as humanists see each person as unique so what is the point in trying to find 'laws' about human behaviour when they are not going to apply to most people. Humanists consider what is important is each individual's subjective experience; this data would not be directly observable to anyone else. In other words humanists emphasise the need to see the world through each person's perspective. Experimentation is seen as dehumanising. The idea of determinism is rejected, people have free will and are able to make their own choices, so we would all react differently in an experiment, there wouldn't be the opportunity to be able to make 'laws' about how everyone would respond to the same stimulus/situation. ...read more.

(http://atschool.eduweb.co.uk/barrycomp/bhs/gcse_resources_pdf/the%20nature%20nurture%20Debate.PDF) In contrast, the humanistic approach is not scientific as it adopts the view that individual's behaviour cannot be measured, as each individual's personal behaviour must be considered. This approach sees human beings as free, capable of choosing what they do. On the basis of Rogers work on self-concept, he became convinced that human beings are free and able to choose. Humanistic psychologists believe human beings are continuously striving for growth, and to make their own choices, which influence the path of their lives. Through these freely made choices, each person grows into a unique individual. Overall the behaviouristic approach could be said to have an advantage due to the fact that it is scientific and behaviour can be observably measured and replicated, whereas the humanistic approach does not allow scope to measure data putting it at a disadvantage. Directly Consulted Sources: Gross, R. (2005). Psychology The Science Of Mind And Behaviour. 5th Edition. (Pp.17). Kent: GreenGate Publishing Service. W.Eyseneck, M. (2004). Psychology An International Perspective. (Pp.811-812, P.84, 814). USA: Psychology Press Ltd. E.Smith, E, Hoeksenna, S.N, Fredrickson, B, R.Loftus, G. (2003). Introduction To Psychology. 14th Edition. (Pp.7, 11, 469-470, 476-480). USA: Vicki Knight J.Sternberg, R. (1995). In Search Of The Human Mind. 2nd Edition. (P.52). USA: Harcourt Brace. The Nature - Nurture Debate: http://atschool.eduweb.co.uk/barrycomp/bhs/gcse_resources_pdf/the%20nature%20nurture%20Debate.PDF (Pp.2) Roth, I. (1990). Introduction To Pschology. Volume 1. (Pp. 477). Milton Keynes: Open University. ...read more.