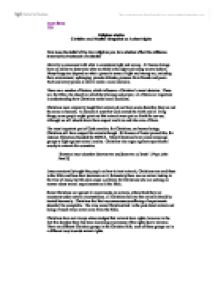 Christian and Muslim viewpoints on Animal rights How does the belief of the two religions you have studied affect the attitudes towards the treatment of animals?

Religious studies Christian and Muslim viewpoints on Animal rights How does the belief of the two religions you have studied affect the attitudes towards the treatment of animals? Morality is concerned with what is considered right and wrong. All human beings have an ability to determine what we think is the right and wrong way to behave. Many things can depend on what a person's sense of right and wrong are; including their environment, upbringing, parents attitudes, pressure from friends and peers. Each and every person is able to make a moral decision. There are a number of factors, which influence a Christian's moral decision. These are, the Bible, the church in which they belong and prayer, all of them are important in understanding how Christians make moral decisions. Christians were originally taught that animals do not have souls; therefore they are not the same as humans. In Genesis it says that God created the Earth and all living things, some people might point out that animals were put on Earth for our use, although we still should show them respect and love and take care of them. The most important part of Gods creation, for Christians, are human beings, Christians still have respect for animals though. St Frances of Assisi proved this, for instance Christians founded the RSPCA. ...read more.

'God has the right to have all his creatures treated with proper respect.' (Cardinal Heenan, Catholic Archbishop.) The Qu'ran does permit meat eating, although given this there are many Muslims, such as the Shi'ite and Sufis, who see vegetarianism as the Islamic ideal and choose this diet. 'Once, during a severe famine, a student of religion saw a dog lying on the ground, so weak it could not even move. The student was moved to pity, and immediately sold his books and brought food to give to the dog. That very night, he had a striking dream. "You need not work so hard to acquire religious knowledge, my son. We have bestowed knowledge upon you."' (This is a Muslim story from the Muslim Voice in January 1990) Allah created all living things, including animals, all animal have their own way of living and existing in our universe. Muslims believe that all animals praise Allah in their own special way, and to do service to Allah. Allah gave wings to the birds to let them fly, he enabled the fish to swim and the horses to run, Allah gave each animal their skills and abilities which helps them throughout their lives, human beings existed after animals did. 'There is not an animal on Earth, nor a bird that flies on it's wings, but they are communities like you.' ...read more.

He did not kill me for any useful purpose." ' 'Animals most suffer, although it is right to experiment on them if this helps to save human lives.' How far do you agree with this statement, refer to Christianity and Islam? I think that researching and experimenting on animals on a whole is wrong, after saying this I believe that experimenting for medical purposes is acceptable, although if there is any alternative to vivisection that way is preferable. I do not think that animals should be experimented on excessively, the tests and such forth should be as little as possible to inflict the least pain and suffering. I believe that God created animals and birds on the 5/6 day of creation; he placed man on earth in his image to rule over everything on the earth, he wanted mankind to take care of his world for him and to look after every living thing in it. 'Who ever is kind to the creatures of God if kind to himself.' Mohammed Muslims have no support for cases when pain or cruelty is inflicted upon an animal. They do not accept experimentations on any animal for cosmetics under any circumstances, although it is acceptable to experiment for medical reasons if there is no other way. 'A good deed done to a beast is as good as doing good to a human being; while an act of cruelty to a beast is as bad as an act of cruelty to a human being.' Mohammad Laura Stone 11B ...read more.