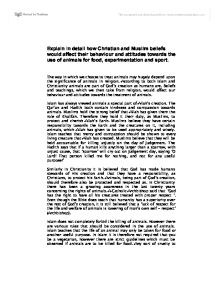 Explain in detail how Christian and Muslim beliefs would affect their behaviour and attitudes towards the use of animals for food, experimentation and sport.

Explain in detail how Christian and Muslim beliefs would affect their behaviour and attitudes towards the use of animals for food, experimentation and sport. The way in which we choose to treat animals may hugely depend upon the significance of animals in religion. According to both Islam and Christianity animals are part of God's creation as humans are. Beliefs and teachings, which we then take from religion, would affect our behaviour and attitudes towards the treatment of animals. Islam has always viewed animals a special part of Allah's creation. The Qur'an and Hadith both contain kindness and compassion towards animals. Muslims hold the strong belief that Allah has given them the role of Khalifah. Therefore they hold it their duty, as Muslims, to protect and cherish Allah's Earth. Muslims believe they have certain responsibility towards the Earth and the creatures on it, including animals, which Allah has given to be used appropriately and wisely. Islam teaches that mercy and compassion should be shown to every living creature that Allah has created. Muslims believe that they will be held accountable for killing unjustly on the day of judgement. The Hadith says that if a human kills anything larger than a sparrow, with unjust cause, that 'sparrow' will cry out on judgement day, saying 'O Lord! That person killed me for nothing, and not for any useful purpose!' Similarly in Christianity it is believed that God has made humans stewards of His creation and that they have a responsibility, as Christians, to protect his Earth. ...read more.

Muslims would prefer to look for alternative methods. Muslims believe that experiments on animals should not be carried out unless there is a very good reason. For example, if experimentation on animals is needed to progress in the medical field, and there are no possible alternatives, then it may be allowed. However, experimentation for the development of luxury and unnecessary products is forbidden. Islam teaches that Muslims should ideally purchase products that have been manufactured by halal methods, and not by cruel methods causing the animal to suffer. Christianity permits scientific experimentation on animals, but as in Islam only with good reason. Roman Catholics believe that medical or scientific experimentation may be carried out if it ' remains within reasonable limits', and 'if it contributes to the caring for or saving of human lives'. Similarly to Islam, if such experimentation or vivisection can be beneficial to humanity, it is permitted but not encouraged. This belief that animal lives may in some cases be taken to benefit humans, stems from the Christian belief that God has given humans dominion over His creation. This does not necessarily mean that humans have the right to disregard animals, but that they have an obligation to protect and respect God's creation. The denomination of the Quakers strongly encourage that others resist any kind of vivisection and look for alternative methods of investigating and testing. A statement from the Methodist Church, in 1990, says that 'unnecessary and unjustifiable experiments...as of cosmetics...should not take place.' ...read more.

In Islam there are various other beliefs that affect the behaviour and attitudes of Muslims towards animals. In the Qur'an, in surah 5:2, 5:98, it says 'O you who believe! Do not kill game while you are in the state of ihram.' The state of ihram is a state of purity, total serenity and peace for religious purposes. If a Muslim were on hajj they would be in a state of ihram, and therefore any living creature around them would be safe, as the Muslim would be forbidden to harm it. The killing of any living creature whilst in ihram is forbidden in Islam, which would include the hunting of animals for whatever reason. Both Christians and Muslims share the belief that they have a duty to God to look after His creation, and therefore animals, as they are part of that creation too. This belief affects their attitudes and behaviour towards animals in many ways. Both Islam and Christianity permit the use of animals for food or for a useful purpose, but not simply for pleasure as a sport. Islam is specific in how the animal is killed, as the method of halal slaughter must be used. Christian views are similar to that of Muslims, saying that an animal may be used for experimentation if it will benefit humans. Islam says that animals may be used to further medicinal research, and only if there are no other possible alternatives. ...read more.