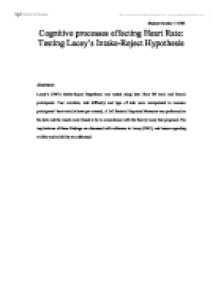 Cognitive processes effecting Heart Rate: Testing Lacey's Intake-Reject Hypothesis Abstract: Lacey's (1967) Intake-Reject Hypothesis was tested using data from 88 male and female participants. Two variables, task difficulty and type of task were manipulated to measure participants' heart rate (in beats per minute). A 2x2 factorial Repeated Measures was performed on the data and the results were found to be in concordance with the theory Lacey had proposed. The implications of these findings are discussed with reference to Lacey (1967), and issues regarding validity and reliability are addressed. Introduction It is well known that heart rate changes when we experience different emotions. For example, your heart starts beating faster when a 'scary' scene occurs in a horror film, or you feel as if it skips a beat when you think you've seen a ghost. Detecting these changes is difficult and by making even more precise recordings of heart rate activity, other, smaller changes in heart rate (not necessarily related to emotion or stress) which may be associated with subtle changes in perceptual and cognitive processing (Hahn, 1973). Instinct tells us tells that heart rate increases when we encounter difficult situations, or does it? Lacey (1967) ...read more.

The number of correct responses was also recorded for each participant. The following instructions were read out to each participant at the start of the study. "You are going to have several things to do. My colleague will tell you when to start. Two tasks involve mental arithmetic. For these tasks, I will read out problems. You will work out he answer in your head and write it down. You must solve those problems in your head and write only the answers on the paper. Do not do any calculations on the paper. Please work quickly and efficiently. In the two other tasks you will have to check off individual letters among a set of other letters. Again please work quickly and efficiently. Never rush but work with full concentration. The whole procedure will be finished in about 7-8 minutes. Please sit in a relaxed fashion throughout the experiment. Too much body movement will spoil the heart rate record." Results (See Appendix for full SPSS output ) A 2-way factorial ANOVA (for a repeated measure design) was performed on the data. From Table 1 below , it can be seen that a significant main effect for Task Type (F1,87 = 25.325, p < 0.001) ...read more.

It would be interesting to see if there was a biological difference in the heart rate responses of males and females to type of task given and their performance at various difficulty levels. Furthermore, different populations could be examined, testing for any possible cultural differences that may have an effect on heart rate during problem solving. As mentioned above, it may also be an idea to test to see if preparation for the tasks has any effect on heart rate during performance, if the participants know what to expect from the tasks, their physiological responses may differ from when they do not know what to expect. In conclusion this study has indicated that although there is no direct relationship between task difficulty and heart rate, levels of difficulty with the types of task performed do have an effect on heart rate, as do the types of tasks. This supports Lacey's Intake-Reject Hypothesis suggesting that heart rate can, in fact, change depending on the type of task presented; tasks requiring the rejection of information from the environment (mental arithmetic tasks) were proved to produce a faster heart beat and tasks that required the intake of information from the environment (visual search tasks) were proved to produce a lower heart rate. ...read more.