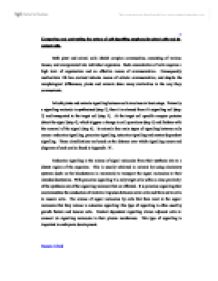 Comparing and contrasting the nature of cell signalling employed by plant cells and by animal cells.

Comparing and contrasting the nature of cell signalling employed by plant cells and by animal cells. Both plant and animal cells inhabit complex communities, consisting of various tissues, and amalgamated into individual organisms. Such concentration of cells requires a high level of organisation and an effective means of communication. Consequently multicellular life has evolved intricate means of cellular communication, and despite the morphological differences, plants and animals share many similarities in the way they communicate. In both plants and animals signalling between cells involves six basic steps. Primarily a signalling molecule is synthesised (step 1), then it is released from it's signalling cell (step 2) and transported to the target cell (step 3). At the target cell specific receptor proteins detect the signal (step 4), which triggers a change in cell operations (step 5) and finishes with the removal of the signal (step 6). In animals four main types of signalling between cells occurs: endocrine signalling, paracrine signalling, autocrine signalling and contact dependent signalling. These classifications are based on the distance over which signalling occurs and diagrams of each can be found in Appendix 'A'. Endocrine signalling is the release of signal molecules from their synthesis site to a distant region of the organism. ...read more.

It is also involved with inducing seed germination and in certain plants it regulates seed enzyme production and the stimulating of flowering. As well as these hormones recent studies have defined the last four groups (see below) as also being chemical signals utilised by plants. Brassinolides, steroids similar to those found in animals, stimulate elongation and cell division, and when synthesis of brassinolides is inhibited dwarf plants are produced. Salicyclic acid, which has a structure similar to aspirin, is thought to be implemented in the activation of pathogen defence genes. Volatile fatty acid derivatives known as jasmonates have long been recognised as components of floral fragrance and are now known to be regulators of seed germination, root growth, storage protein accumulation and synthesis of defence proteins. Finally systemin, a small peptide that is produced in wounded plant tissues and is thought to be a defence against herbivores. Systemin has been observed acting as a long distance signal and its discovery suggests there are more similar chemical signals employed by plants that are yet to be discovered. What happens to a signalling molecule once it arrives at its target cell can be divided into three stages: reception, transduction and response, a diagrammatic explanation of these stages can be found in Appendix 'B'. ...read more.

These extracellular chemical signals are known as neurotransmitters and they can diffuse across the narrow space between the transmitting axon terminal and the target nerve cell in less than a millisecond. Despite the detailed research into cell signalling by modern science we still understand very little about many cellular signalling processes, especially in plants. The traditional notion that plasmodesmata are passive structures with little or no influence upon the stuff that flows through them is increasingly being challenged. There are indications that some plasmodesmata can transport proteins and nucleic acids, and so play a primary role in the organisation of plant growth and development. The plethora of differing extracellular signals, receptors and intracellular signal-transduction pathways can be categorised into a number of relatively few groups. However, the same signalling pathway can often control and develop very different cellular responses, from proliferation and differentiation to apoptosis. . Our increased understanding of cell signalling in both plants and animals is constantly shedding new light on such things as life expectancy and cancer growth. Further research will undoubtedly reveal even more methods of cell signalling, in both plants and animals. Appendix 'A' Types of signalling between cells. Appendix 'B' Overview of cell signalling. Appendix 'C' Diagram showing plasmodesmata and gap junctions. Appendix 'D' Diagram showing the process of a phosphorylation cascade. ...read more.