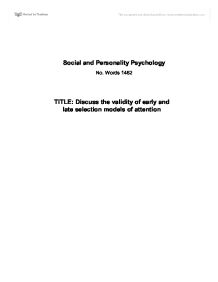 Discuss the validity of early and late selection models of attention.

Social and Personality Psychology No. Words 1462 TITLE: Discuss the validity of early and late selection models of attention The early psychologist William James (1890, cited in Gazzaniga, 1998) defined attention as "... the taking possession of the mind, in clear and vivid form, of one out of what seem several simultaneously possible objects or trains of thought. Focalization, concentration of consciousness are of its essence..." This definition concentrates on the aspects of attention current psychologists are interested in. Cherry (1953) became fascinated in the "cocktail party" problem, that is, how can a person focus on certain aspects of the environment, a conversation, and ignore other aspects, other simulations conversations? (also known as selective attention). This essay is going to consider the validity of early and late selection models of attention which is the extent to which they are true, correct and conform with reality (Reber and Reber, 2001) by looking at research mainly on auditory attention. The specific information processing models to be discussed are those from Broadbent, Deutsch and Deutsch, and Treisman. A number of alternative theories have been subsequently suggested which shall be considered briefly. ...read more.

found that both the attended and unattended channels could be processed if there is a meaning of the items and so a link can be made. Moray (1959) noticed that although most information in the unattended channel is ignored if the information is of high enough importance, for instance hearing your own name, participants could discriminate and orient to the information. These findings led many researchers to believe that all information must be processed to allow some information to breakthrough. Deutsch and Deutsch (1963, cited in Gazzaniga, 2000) suggested the late selection model which is the concept that selection for processing and representation in conscious awareness occurs after both ignored and attended inputs are processed equally by the perception system and reach a stage of semantic analysis and encoding. There is little experimental evidence for late selection theory, but there is some by MacKay (1973, cited in Parkin, 2000). Participants shadowed a lexically ambiguous message, the content of the non-shadowed message could bias the meaning of the word "bank" (meaning either river bank or money bank). MacKay found a reliable biasing effect, recognition favoured the interpretation of the shadowed message suggested by the unattended message. ...read more.

This means that the findings from auditory attention may not reflect real life and so the results may not be valid or real and the process may be more complex than any of the theories suggested (Tipper, 1992, cited in Eysenck, 2000). In conclusion, the validity of both early and late selection models of attention is poor. The early selection theory by Broadbent had been disproved by a number of psychologists, the theory does not explain why sometimes information from an unattended channel can come into consciousness and therefore could not explain breakthrough. There are implicit and non-conscious effects of semantic processing of the ignored channel, therefore the early selection models are invalid. It also seems very unlikely that all information is fully processed (late selection model) because there is research to show that information from an attended channel is processed more accurately than an unattended channel. It seems likely that Treisman's attenuation theory is more valid, however there is still confusion over what attenuation is and how it works. The methods used in experimental research into auditory attention are unlikely to provide valid results because they does not replicate how people attend in real life situations. ...read more.