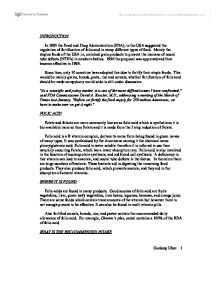 Folic acid. In 1993 the Food and Drug Administration (FDA), in the USA suggested the regulation of fortification of folic acid in many different types of food. Since then, only 10 countries have adopted this idea to fortify their staple foods. This would

INTRODUCTION In 1993 the Food and Drug Administration (FDA), in the USA suggested the regulation of fortification of folic acid in many different types of food. Mainly the staples foods of the USA i.e, enriched grain products to prevent the increase of neural tube defects (NTD's) in newborn babies. 1996 the proposal was approved and then became effective in 1998. Since then, only 10 countries have adopted this idea to fortify their staple foods. This would be mainly grains, breads, pasta, rice and cereals; whether fortification of folic acid should be made compulsory world wide is still under discussion. "As a scientific and policy matter, it is one of the more difficult issues I have confronted," said FDA Commissioner David A. Kessler, M.D., addressing a meeting of the March of Dimes last January. "Before we fortify the food supply for 250 million Americans, we have to make sure we get it right." FOLIC ACID Folate and folacin are more commonly known as folic acid which is synthetic as it is bio-available more so then Folate and it is made from the 2 step reduction of Folate. Folic acid is a B vitamin complex, derives its name from being found in green leaves of many types. It was synthesised by the Americans naming it the chemical name pteroylglutamic acid. ...read more.

If insufficient levels are consumed then this is when neural tube defects occur. NEURAL TUBE DEFECTS AND HOW THEY CAN BE PREVENTED NTD's are birth defects and involve incomplete development of the neural tube. The neural tube is what develops into the spinal cord and brain. There are many types of NTD's one of the NTD's is spina bifida and this is when the spinal cord is no completely surrounded by bone sometimes referred to as open spine. Spina bifida occurs as two major forms. Spina occulta (hidden) is a small gap in the spine. This is hard for people to acknowledge, as it has no symptoms. The more worrying type is spina bifida aperta. It produces a noticeable sack on the back called meningocele. The picture below illustrates spina bifida aperta. Anencephalaly is another birth defect where babies are born with underdeveloped brains and deformed skulls. This condition is critical and death may occur in a few hours. These two defects make up 90% of all NTD's. Encephalocele makes the remaining 10%. This defect is distinguished by a whole in the skull revealing the brain tissue, which results in mental disabilities the occurrence of the defect is usually between the 17th and 30th day after conception. ...read more.

CONCLUSION The fortification of wheat products with the vitamin folic acid is a good idea and although it would be beneficial to make it compulsory the amount at which it is fortified with should perhaps be reviewed. In order to keep everyone satisfied by being certain that folic acid levels will not exceed 1000 micrograms in especially the elderly to whom it may cause most damage. The effects are not critical but may mask anemia or vitamin B12 deficiency. As the elderly are already prone to many health problems another does not need to be added. Wheat is definitely a good choice of food to fortify as it is classed as a staple food, which is affordable by all. It should be made mandatory that all pregnant women take some sort of folic acid supplements as it clearly does make a big difference. Educating the younger generation about NTD's is also important as it will involve great behavioral changes within many populations of the world and if there is an educated understanding then it is more likely to take a positive effect. The advantages of making this fortification compulsory strongly outweigh the disadvantages. However it should be remembered that folic acid is important through out life and should be consumed as part of a regular diet and not just during time of pregnancy. ...read more.