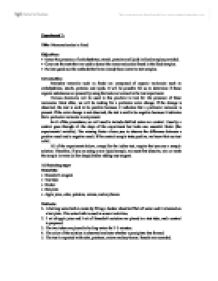 Experiment 7: Title: Macromolecules in Food Objectives: * Detect the presence of carbohydrates, starch, proteins and lipids in food samples provided. * Carry out the tests that are used to detect the macromolecules found in the food samples. * Put into good use the methods that have already been learnt to test samples. Introduction: Everyday materials such as foods are composed of organic molecules such as carbohydrates, starch, proteins and lipids. It will be possible for us to determine if these organic substances are present by using the tests we learned in the last experiment. Various chemicals will be used in this practical to test for the presence of these molecules. Most often, we will be looking for a particular color change. If the change is observed, the test is said to be positive because it indicates that a particular molecule is present. If the color change is not observed, the test is said to be negative because it indicates that a particular molecule is not present. In all of the procedures, we will need to include distilled water as a control. Usually, a control goes through all the steps of the experiment but lacks one essential factor (the experimental variable). The missing factor allows you to observe the difference between a positive result and a negative result. If the control sample tests positive, we know that our test is fail. All of the experiments below, except for the iodine test, require that you use a sample solution. Therefore, if you are using a non-liquid sample, we must first dissolve, mix or mash the sample in water (a few drops) before adding any reagent. A) Reducing sugar Materials: * * Benedict's reagent * Test tube * Beaker * Hot plate * Apple juice, coke, potatoes, onions, and soy beans Methods: 1. A boiling water bath is made by filling a beaker about half full of water and it is heated on a hot plate. This water bath is used in several activities. 2. ...read more.

It is also one of the most recognizable and widely sold commercial brands. It is generally agree that Coca-Cola can be harmful if consumed to excess, particularly to young children whose soda consumption competes with, rather than complements, a balanced diet. This is because coke contains high sugar and lack of essential nutrient such as protein and vitamin. Hence, it is calories-rich and nutrient-poor beverage. This high sugar soft drink also will cause obesity. Obesity is a condition in which the natural energy reserve of humans or other mammals, which stored in fat tissue, is expanded far beyond usual levels to the point where it impairs health. Results: Sample(1ml) Reducing Sugars Starch Protein Lipids Soft drink Green blue to brick red Precipitate form Present Yellow remain yellow Not present Yellow to light orange Not present Not transparent Not present Discussions: There are several tests we use in this experiment to test the component in the coke. The tests are Benedict test, iodine test, Biuret test and paper test. The red precipitate is formed when Benedict test is performed on the coke. This shows that the coke contains reducing sugars. When the iodine is added to the coke, yellow colour is observed. This means that the coke do not contain starch. There will be dark blue in colour if the coke does not contain starch. The coke also give a negative results for the Biuret test (colour unchanged) and the paper test (no transparent spot). The table below shows the nutrition facts of the coke which we found from the internet: The nutrition facts of the coke also support our results which the coke is free of fat, protein, and starch. The coke also contains sodium as show in the table above. Onions Introduction: Onion in the general sense can e used for any plant in the Genus allium but used without qualifiers usually means Allium cepa L, also called the garden onion. ...read more.

In the presence of starch the Iodine will break the glycosidic bonds to form the precipitate (an iodine-starch complex is formed causing a color change from reddish-brown to violet-black). Supposedly, the test for Iodine reagent with soybeans should produce a positive result. But unfortunately in this experiment, the soybeans do not contain much starch to proof that there's starch present, so the reddish brown color remains unchanged. A reducing sugar is a straight chain sugar with free aldehyde or ketone at the end. A positive test for Benedicts was an orange or brick red precipitate. In Benedict's test, Benedict's reagent (a solution of sodium citrate and CuSO4) will produce an insoluble brick red or orangish Cu2O precipitate in the presence of reducing sugars (aldoses and some ketoses) and heat. In the presence of reducing sugars, he benedict's solution will cause the precipitate because it reacts with the free aldehyde or ketone present at the end of the sugar chain. To detect protein, the Biuret test will be used. In this test, NaOH and CuSO4 are added to test solutions. In the alkali environment, the Cu2+ ions will oxidize. In the process Cu2+ ions reduced to Cu+1 producing a purple color whose intensity directly correlates with the amount of protein present. A positive test for Biuret was lavender to black precipitation, which depends on the amount of protein present. A positive test for the grease spot test was to see if there's a translucent patch on the brown paper when it is dried. In each of these, there were stronger test and some tests provide weaker results. Stronger corresponds to a higher amount of the substance present and weaker correspond with a lower or lowest amount substance present. For example, the potato will have a strong test towards iodine reagent \, whereas the soybean was barely positive. For the Biuret reagent, the soybean was a chunky purple, leading us to believe that it was the strongest result towards protein test. Each of these tests involved a chemical change, except for the grease spot test. In this case the change was a physical one. ...read more.