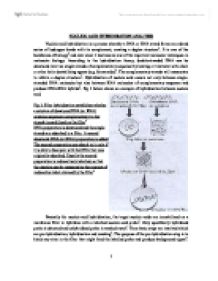 NUCLEIC ACID HYBRIDISATION ANALYSIS Nucleic acid hybridisation is a process whereby a DNA or RNA strand forms an ordered series of hydrogen bonds with its complement, creating a duplex structure1. It is one of the backbones of biology2 and ever since it has became one of the important molecular techniques in molecular biology. According to the hybridisation theory, double-stranded DNA can be denatured into two single strands of complementary sequence by heating or treatment with alkali or other helix destabilising agents (e.g. formamide)3. The complementary strands will reassociate to reform a duplex structure3. Hybridisation of nucleic acid occurs not only between single-stranded DNA molecules but also between RNA molecules of complementary sequence and produce DNA-RNA hybrids3. Fig 1 below shows an example of hybridisation between nucleic acid. Fig 1: Filter hybridisation establishes whether a solution of denatured DNA (or RNA) contains sequences complementary to the strands immobilized on the filter4 DNA preparation is denatured and the single strands are adsorbed to a filter. A second denatured DNA (or RNA) preparation is added. The second preparation can adsorb to it only if it is able to base pair with the DNA that was originally adsorbed. Usually the second preparation is radioactively labelled, so that the reaction can be measured as the amount of radioactive label retained by the filter4 Basically for nucleic acid hybridisation, the target nucleic acids are immobilized on a membrane filter to hybridise with a labelled nucleic acid probe3. Only specifically hybridised probe is detected and unhybridised probe is washed away3. Three basic steps are involved which are pre-hybridisation, hybridisation and washing3. The purpose of the pre-hybridisation step is to block any sites in the filter that might bind the labelled probe and produce background signal3. Blocking agents are used and can take from 15 minutes to 4 hours3. After which the filter is incubated in a solution that contains the labelled probe in the hybridisation step3. ...read more.

Types of probes / primers Characteristics Uses Duplex scorpion primers19,20 * Consists of a primer linked to a probe sequence, which has a fluorophore attached to its 5' end. * Probe sequence is annealed to a complementary oligonucleotide sequence with a quencher at its 3' end. * Increase the speed of hybridisation in amplification reactions. * Suited for monitoring real-time PCR assays. Amplifluor primers21,22.23 * Direct detection of amplification products. * Labelled hairpin primers that are directly incorporated into amplification products. * Hairpin structure is present at the 5' end of one of the oligonucleotide primers. * Hairpin structure contains a fluorophore and quencher moiety in the hairpin stem. * Incorporated during rolling circle amplification. * Monitor the accumulation of products in a strand displacement assay. "HyBeacons" probes24 * Single stranded oligonucleotides that lack significant secondary structures, in which a fluorophore is quenched by an internal nucleotide. * When a probe binds to a nucleic acid, its conformation changes and as a result, the fluorescence intensity of the fluorophore increases. - Table G: Types of probes / primers, characteristics and their uses1 (continued) Types of probes / primers Characteristics Uses Yin-yang probes25 * Probes consisting of two complementary oligodeoxyribonucleotides of different length. * One labelled with a fluorophore and the other labelled with a quencher. - Cyclicons probes26 * Also known as Pseudo-cyclic oligodeoxyribonucleotides (hybridisation-based fluorescent probes). * Consists of 2 oligonucleotides, linked at either their 5' or 3' ends. * A fluorophore is attached to one of the oligonucleotides and a quencher is attached to the other oligonucleotide. - Fig 4: Schematic representation of fluorescence signal generation with different nucleic acid hybridisation probes1 Fig 4 (continued)1 With these newly introduced probes, nucleic acid hybridisation can be made to detect amplified targets in real time and improves in the techniques of such process. Overall, nucleic acid hybridisation has been a great help in terms of speed and simplicity1. It can be combined with other molecular biology techniques and can be followed in real time, providing quantitative determination of target nucleic acids over a broad range of concentrations1. ...read more.