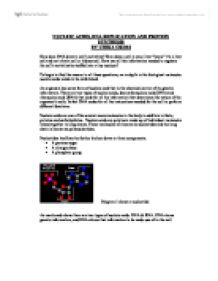 NUCLEIC ACIDS, DNA REPLICATION AND PROTEIN SYNTHESIS BY CHIKA OKOSI How does DNA direct a cell's activities? How does a cell in your liver "know" it's a liver cell and not a brain cell or kidney cell. How can all this information needed to regulate the cell's activities be stuffed into a tiny nucleus? To begin to find the answer to all these questions, an in-depth in the biological molecules nucleic acids needs to be established. An organism has some form of nucleic acid that is the chemical carrier of its genetic information. There are two types of nucleic acids, deoxyribonucleic acid (DNA) and ribonucleic acid (RNA) that code for all the information that determines the nature of the organism's cells. In fact DNA codes for all the instructions needed for the cell to perform different functions. Nucleic acids are one of the several macromolecules in the body in addition to facts, proteins and carbohydrates. Nucleic acids are polymers made up of individual molecules linked together in long chains. These molecules are known as nucleotides and the long chain is known as polynucleotides. Nucleotides itself can be further broken down to three components: * A pentose sugar * A nitrogen base * A phosphate group Diagram 1 shows a nucleotide As mentioned above there are two types of nucleic acids: DNA & RNA. ...read more.

The fifth carbon on the sugar bonds with an oxygen from a phosphate group/ Another oxygen from the same phosphate group bonds with carbon-3 on the sugar molecule, and it is this repeating chain that makes up the backbone of a DNA strand. But since DNA is double stranded there are two sugar phosphate backbone in DNA molecule. DNA REPLICATION DNA replication begins with a partial unwinding of the double helix at an area known as the replication fork. An enzyme known as DNA helicase accomplishes this unwinding. As the two DNA strands separate and the bases are exposed the enzyme, DNA ploymerase moves in at the point of synthesis will begin. The DNA polymerase knows where to start the synthesis due to a short segment of RNA known as RNA primer. The primer is "laid down" complementary to the DNA template by an enzyme known as RNA polymersase. The DNA polymerase then adds nucleotides one by one in an exactly complementary manner: A to T and C to G. Diagram to show DNA replication DNA polymerase is described as being "template dependent" in that it will read the sequence of the bases on the template strand and then synthesize the strand. DNA polymerase catalyzes the formation of the hydrogen bonds between each arriving nucleotide and the nucleotides on the template strand. ...read more.

How does the enzyme know where to start? The starting point of a gene is marked by a certain base sequence called a promoter site. These sites are recognized by a factor known as sigma. It is sigma's job to recognize the promoter sites and "tell" the DNA dependent RNA polymerase where to begin the process of transcription. There is also a base sequence at the end of a gene that stops messenger RNA synthesis. A factor that helps signal the end of a gene is called rho. When the end of the gene is near, the rho factor binds to the messenger RNA and interacts with the RNA polymerase. This causes the enyme to denture and fall off, thus stopping transcription. PROTEIN SYNTHESIS Most of the time when a cell is not dividing, it is performing a series of activities under the control of the DNA, in the nucleus. In order to do this, information from certain portions of the DNA in the chromosomes must be taken out into the cytoplasm, to be used to make (synthesize) control proteins (enzymes ect.) for the cell. This process is known as protein synthesis. STEP 1 OF PROTEIN SYNTHESIS: INTIATION Protein synthesis is intitated when an messenger RNA, a ribosome and the first transfer RNA molecule carry its Methionine amino acid, come together. ...read more.

This is overall quite well written. There is a little confusion in some places about what happens in eukaryotes vs prokaryotes, and a few notable absences (e.g. mention of the code for a start codon, which is arguably more important than the promoter sequence.

There are a few silly mistakes in here, which makes the whole piece seem a bit rushed, but in general the material is well understood. There are a couple of small biological misunderstandings e.g. about what the nucleus actually protects genomic DNA from.

At my (Russell group) university, this would score 4/5.