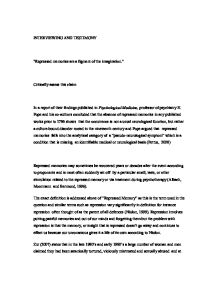 Repressed memories are a figment of the imagination -critically discuss

INTERVIEWING AND TESTIMONY "Repressed memories are a figment of the imagination." Critically assess this claim In a report of their findings published in Psychological Medicine, professor of psychiatry H. Pope and his co-authors concluded that the absence of repressed memories in any published works prior to 1786 shows that the occurrence is not a usual neurological function, but rather a culture-bound disorder rooted in the nineteenth century and Pope argued that repressed memories falls into the analytical category of a "pseudo-neurological symptom" which is a condition that is missing an identifiable medical or neurological basis (Pettus, 2008) Repressed memories may sometimes be recovered years or decades after the event according to proponents and is most often suddenly set off by a particular smell, taste, or other stimulation related to the repressed memory or via treatment during psychotherapy (Albach, Moormann and Bermond, 1996). The exact definition is addressed above of "Repressed Memory" as this is the term used in the question and similar terms such as repression vary significantly in definition for instance repression often thought of as the parent of all defences (Niolon, 1999). Repression involves putting painful memories and out of our minds and forgetting them but the problem with repression is that the memory, or insight that is repressed doesn't go away and continues to effect us because our unconscious gives it a life of its own according to Niolon. Zur (2007) states that in the late 1980's and early 1990's a large number of woman and men claimed they had been satanically tortured, viciously mistreated and s******y abused and at the same time young children's accounts of s****l abuse had also been rising. ...read more.

Freyd (1994, p.312) stated if a child processed the betrayal of the trusted person in the usual way, he or she would be moved to stop interacting with the child abuser betrayer. Freyd goes on to explain that the victim instead needs to ignore the betrayal and if the child abuser is a primary caregiver it is fundamental that the child keeps behaving in such a way that will encourage continued attachment and Freyd explains that for the child to withdraw from a primary caregiver on which child is dependent would endanger the child's life both physically and mentally and thus the ordeal of child abuse by its very nature necessitates that the information about the abuse be blocked from mental mechanisms that control attachment and attachment behaviour. Freyd (1994, p.312) states the information that gets blocked may be partial blocking such as blocking emotional responses only but that in the majority of many cases partial blocking will lead to a more profound amnesia of the events Briere and Conte (1993) addressed the problem of self-reported amnesia for abuse in adults molested as children. Briere and Conte (1993) used a sample of 450 adult clinical subjects reporting s****l abuse histories and a total of 267 subjects (59.3%) identified some period in their lives, before age 18, when they had no memory of their abuse. Briere and Conte (1993) stated that variables most predictive of abuse-related amnesia were greater current psychological symptoms, molestation at an early age, extended abuse, and variables such as victimization by multiple perpetrators reflecting especially violent abuse and victim fears of death if she or he disclosed the abuse to others. ...read more.

the woman may break or grope for words when discussing some things about her father and she may show other signs of anxiety such as perspiration or blushing but this does not mean by any means whatsoever that there was any s****l abuse McHugh (2008) professor of psychiatry at Johns Hopkins University describes the book The Courage to Heal: A Guide for Women Survivors of Child s****l Abuse as the bible of inept therapists. McHugh (2008) states that in the mid-1990s, some clinicians and therapists seemed to not recall the Hippocratic Oath as they oversaw a plague of grave and shattering allegations of childhood s****l abuse and satanic cult worship. McHugh (2008) argues that often with no proof to support them clinicians and therapists would advise suggestive treatments that dredged up fake memories and multiple personalities, separated daughter from father, sent innocent men to jail and caused extensive monetary and social ruin. McHugh (2008) points out that psychiatry is commencing to replicate its mistakes and both the public and the medical community should pay consideration as to why things went so shockingly awry 15 years ago. McHugh (2008) states the whole theory of repressed memories did great damage to psychiatry's repute in that some of the most illustrious institutions in the USA could fall into this ambush and malign good families out of a non- proven hypothesis about psychiatric matters. McHugh (2008) continues that that reason it did great harm to psychiatry's reputation was the fact that the discipline itself did not correct this non- proven hypothesis and its practice continued until there were major lawsuits in the USA so that the courts rather than the psychiatric profession put an end to the repressed memory theory. ...read more.