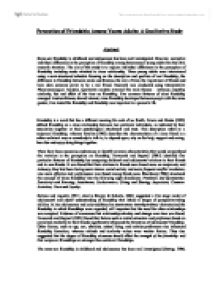 Perception of Friendship Among Young Adults: A Qualitative Study Abstract Same-s*x friendship in childhood and adolescence has been well investigated. However, normative individual differences in the perception of friendship among heterosexual young adults has had little research attention. The aim of this study is to explore individual differences in the perception of friendship including needs attached to close relationship. Three young adults were interviewed using a semi-structured schedule focusing on the description and qualities of real friendship; the difference in friendship between males and females; the role of time; the importance of friends and how does someone prove to be a real friend. Research was conducted using Interpretative Phenomenological Analysis. Qualitative analysis revealed five main themes - intimacy, empathy, similarity, fun and effect of the time on friendship. Five common features of close friendship emerged: trustworthiness, shared interest, close friendship developed between people with the same gender, time tested the friendship and friendship was important in a person's life. Friendship is a word that has a different meaning for each of us. Smith, Cowie and Blades (2003) defined friendship as a close relationship between two particular individuals, as indicated by their association together or their psychological attachment and trust. This description refers to a reciprocal friendship, whereas Rawlins (1992) describes the characteristics of a close friend in a rather unilateral way as somebody to talk to, to depend upon, rely on for help, support and caring, have fun and enjoy doing things together. There have been numerous endeavours to identify common characteristics that would comprehend the variation in the perception on friendship. Newcomb and Bagwell (1995) identified five particular features of friendship by comparing children's and adolescents' relations to their friends and to non-friends. It was found that their relations to friends were based more on reciprocity and intimacy; they had been having more intense social activity and more frequent conflict resolution; also more effective task performance was found among friend peers. ...read more.

My friend knew me well and knew that why I didn't want a birthday party ... and she knew all the little silly reasons that I have told her why I didn't want a party... She made her speech; she described me really well .... Everything was just how I'd have liked it. ... She made her speech ...when ... and the way how she de scribed things, described me I really didn't know she knew me that well.(Jane) In an intimate friendship the barriers of conversations seem to disappear; if we like someone, are close to each other and trust each other, then we take this person's opinion and criticism about ourselves better. ... my friends ... have helped me realize my personality and so become a better friend for them. (Aris) With those whom one is getting on well there is a better chance to establish a long term friendship. People get on well with those whom they share the same interests, humour and background. [A real friend ] is someone you can talk to, someone who has similar interest to you, who you can dis cuss those interest with ... trustworthy and have similar interest and background to me. (Gaby) We've just got to know each other very well .. .and we got on very well ... we've got a similar sense of humour ... I like people who are quite considerate and ... who I enjoy being with. Somebody, who is quite a good fun, ... who shares my sense of humour. (Jane) When Jane talked about why having friends was important to her, she expresses that being liked by others is also important to her. Nice to be liked by others.(Jane) Trust Trust is the belief by people that others' motivations towards them are benevolent and honest. (Wikipedia, 2006). Being known very well by someone else puts one into a vulnerable position; when insurance of trustworthiness from the other person is required. ...read more.

five stage model of adolescents' and adults' understanding of friendship. The findings of this study should be considered within the contexts of methodological limitations of the IPA studies. Firstly, Smith (2003) suggested a minimum of eight participants for an IPA study, in this study only three participants were employed, which allowed the me to speculate about possible explanations but not sufficient enough to gain reliable insight and overview about research question. Secondly, it was difficult to avoid reflexivity and bias during the analysis. All interviewers knew their interviewees, therefore their previous knowledge about the participants and the interviewer's preposition could bias both the process of the interview and the transcript analysis. In consequence, the interviewer might read more out of the sentences than what the participant actually had wanted to say. Finally, as all interviewees explained that their relationship with friends from the opposite gender is not as close and honest as with the same gender and they discussed different issues with the opposite gender friends, consequently, the gender of the interviewers and interviewees should be taken into account. In two interview situations, the interviewers and interviewees were from opposite genders, which could inhibit the interviewees to express their views on friendship with honesty. They probably did not feel free to talk about what they really thought and might have altered their opinions about friendship to please the interviewers, which would undermine the main purpose of conducting qualitative study. Despite these limitations, this study highlights a number of important issues for further investigation in an under-researched area. Studying friendship among adults has important implication to health, clinical and counselling psychology. People are social beings, so for this reason, to have friends or to be a friend to someone is one of the noblest goals for which people can aim. Lack of friendship, especially in adults can cause loneliness, low self-worth and self-confidence, a feeling of social exclusion and helplessness that ultimately can lead to depression and other psycho-somatic illnesses. Whereas a good friend can make one's problems go away, get over difficult periods of life, give security and restore one's self-worth. ...read more.