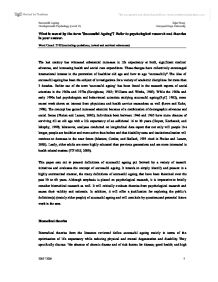 What is meant by the term 'Successful Ageing'? Refer to psychological research and theories in your answer. Word Count: 2763 (excluding quotations, in-text and end-text references) The last century has witnessed substantial increases in life expectancy at birth, significant medical advances, and increasing health and social care expenditure. These changes have collectively encouraged international interest in the promotion of healthier old age and how to age "successfully". The idea of successful ageing has been the subject of investigations for a variety of academic disciplines for more than 3 decades. Earlier use of the term 'successful ageing' has been found in the research reports of social scientists in the 1960s and 1970s (Havighurst, 1963; Williams and Wirths, 1965). While the 1980s and early 1990s had psychologists and behavioural scientists studying successful ageing (Ryff, 1982), more recent work shows an interest from physicians and health service researchers as well (Rowe and Kahn, 1998). The concept has gained increased attention because of a combination of demographic advances and social forces (Phelan and Larson, 2002). Individuals born between 1946 and 1965 have more chances of surviving till an old age with a life expectancy of an additional 16 to 20 years (Hoyert, Kochanek, and Murphy, 1999). Moreover, analyses conducted on longitudinal data report that not only will people live longer, people are healthier and more active than before and that disability rates and institutionalization will continue to decrease in the near future (Manton, Corder, and Stallard, 1993 cited in Phelan and Larson, 2002). Lastly, older adults are more highly educated than previous generations and are more interested in health related matters (FIFARS, 2000). This paper sets out to present definitions of successful ageing put forward by a variety of research initiatives and evaluates the concept of successful ageing. ...read more.

Contemporary gerontologists have criticised this view as too narrow and only advocating one particular lifestyle. Research has shown that older people are heterogeneous, and include many people who prefer less structured lives without the means to fulfil a regimented schedule of activities (Bearon, 1996). Despite criticism, activity has been promoted by older adults themselves as the key to successfully ageing with a gerontological dubbing of this philosophy as "the busy ethic" (Ekerdt, 1986). Another theory of successful ageing has been more positively viewed in recent years; the "continuity theory" (Atchley, 1972 cited in Fisher and Specht, 1999). To summarise, this model proposes that people can age successfully if they carry forward the habits, preferences, lifestyles and relationships from midlife onto late life. The theory has been supported by results of major longitudinal studies which have shown that variables measured during midlife are significant predictors of outcomes in later life, and that many psychological and social characteristics remain throughout the lifespan (Markides and Pappas, 1982). Considering Atchleys (1972) model, the internal continuity provides direction for action and adaptation to external changes which suggests the need for specific criteria required for successful ageing. . Aside from a clear definition of the concept, the prerequisites or criteria necessary for successfully ageing need to be considered as well. Ryff (1989) identified six criteria for successful ageing, which included positive interactions with others, a sense of purpose, autonomy (as opposed to dependency), self acceptance, personal growth, and environmental fit. Fisher (1992, 1995 cited in Fisher and Specht 1999) built upon Ryff's categorization by using a phenomenological approach and verified that five of the six criteria were viewed by respondents as necessary for successfully ageing, and that respondents considered successful ageing as a coping or attitudinal orientation to life in general. ...read more.

they encompass. Most constructs have encompassed only one of these dimensions with exceptions of a few studies (Palmore, 1979) which have been multidimensional. None of the studies have emerged as a standard and no study has directly assessed older adults beliefs about the attributes of successful ageing (Phelan, Anderson, LeCroix and Larson, 2004). An investigation into older individuals' perspectives on the meaning of successful ageing is required to gain a more comprehensive understanding of the concept. It is possible, for instance, that successful ageing may be a dynamic concept for individuals as they age and that individuals definitions may vary substantially by birth cohort, gender, ethnic subgroup and the presence or absence of various chronic diseases (Phelan and Larson, 2002). Exploratory research could be conducted to examine the relevance and meaning of success among different subgroups of ageing individuals at different times in their life span. This would incorporate cultural validity and a more qualitative approach from the point of view of the individual. Although researchers have operationalized the term in a variety of ways, "successful ageing" remains a value judgment. The face validity of the term, and an empirical understanding of its purpose and application, could be improved if societal beliefs were elicited and compared with and incorporated into researchers' definitions (Phelan and Larson, 2002). Aging individuals could enrich the meaning and relevance of successful ageing by providing input to the theoretical definitions which have largely dominated the concept, allowing a more person centered approach to the term. A person centered approach will also be essential for future research on successful ageing as it will allow determination of predictor variables which are truly relevant to persons who are ageing (Phelan and Larson, 2002). Such an understanding is critical in increasing our understanding of a perspective that has not been explored thus far. ...read more.