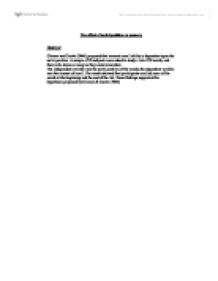 The effect of serial position on memory

The effect of serial position on memory Abstract Glanzer and Cunitz (1966) proposed that accurate recall ability is dependant upon the serial position. A sample of 20 subjects were asked to study a list of 20 words, and then write down as many as they could remember. The independent variable was the serial position of the words; the dependant variable was the amount of recall. The results showed that participants recalled more of the words at the beginning and the end of the list. These findings supported the hypothesis proposed by Glanzer & Cunitz (1966) Introduction Atkinson & Shiffren (1968) proposed a three-stage model of memory. They believed that a sensory register obtains information externally form each of the senses, then selects areas for further processing which is passed on to the short term memory store. They believed that the "short-term memory has a very has a very limited capacity on order of only a few items"(Searlman, Hermann 1994, p.50) they also stated that information only lasts up to 30 seconds. They also suggest that information in the short term memory can be retained if rehearsed by an individual, which increases the probability that it will enter the long term memory, where it has much less chance of being forgotten. ...read more.

A set of standardised instructions were compiled (appendix 2) to read to participants in order to maximise understanding and gain a high level of data, this was also used to stop each experimenter biasing their own results. A consent form was also produced to be signed by all participants (appendix 3), and ethical approval was gained prior to the investigation (appendix 4). Procedure Prior to any testing, participants were asked to read and sign a consent form. Participants were tested in groups of five, all groups were tested separately, but were all tested in the same location, and their data was viewed only by the experimenters. Once consent was obtained the standardised instructions were read to the participants who were then given the word list, to read for 60 seconds. A serial recall procedure was used in which participants were asked to recall the words as they appeared on the list, they were asked to begin this task immediately after they had finished reading the word list. There was no time limit enforced on the recall procedure, participants were instructed to inform experimenters when they had completed the task. ...read more.

The participants were split into three groups of five, and one group of four, the imbalance due to an illness on the day. However because they were not all tested at the same time and by the same experimenter this could have effected the concentration of participants therefore their amount of recall towards the end of list and explain why they showed low recency. A possible direction for future research would be to support the hypothesis of Glanzer & Cunitz (1968) that the recency effect could be eliminated by wiping out the last words from short-term memory, using a distraction technique delaying the test by 30 seconds. By using an independent measures design, a comparison could be made between one group completing a numeric task and the other group being tested immediately. This would provide the appropriate results to determine whether the recency effect could be eliminated. In conclusion, the findings supported Glanzers hypothesis and the hypothesis of the current experiment. The proportion of correct recall was higher for the first and last words of the list compared to the middle section, suggesting that accurate recall is created by the serial posistion in which a word occurs. ...read more.