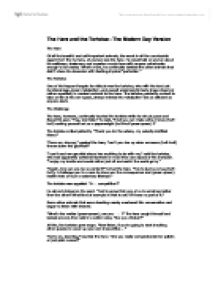 The Hare and the Tortoise - The Modern Day Version

The Hare and the Tortoise - The Modern Day Version The Hare Of all the boastful and self-important animals, the worst in all the countryside (apart from the humans, of course) was the hare. He would talk on and on about his swiftness, sleekness, and superior muscle tone with anyone unfortunate enough to be nearby. What's more, he continually derided the other animals that didn't share his obsession with fleeting physical "perfection." The Tortoise One of his frequent targets for ridicule was the tortoise, who with his stout yet functional legs, lower metabolism, and overall endomorphic body shape stood (or rather squatted) in marked contrast to the hare. The tortoise, perfectly content to take on life at his own speed, always insisted his metabolism was as efficient as anyone else's. The Challenge The hare, however, continually taunted the tortoise while he struck poses and flexed his pecs. "Hey, low-rider," he said, "I bet you can make extra money (huff-huff) renting yourself out as a paperweight (huff-huff preen-preen) I" The tortoise smiled patiently. "Thank you for the advice, my velocity-fortified friend." "Come on, stumpy," goaded the hare, "can't you rise up when someone (huff-huff) throws down the gauntlet?" "I can't see how gauntlet abuse has anything to do with me," said the tortoise, who had apparently achieved slowness in more than one aspect of his character. "I enjoy my inertia and would rather just sit and watch the world go by." ...read more.

A small but vocal non-majority opposed the entire notion of holding a race at all. They wrote op-ed pieces, phoned in to radio talk shows, and even distributed a poster that read, "RACES are not HEALTHY for kids, colts, kittens, pups, chicks, ducklings, cygnets, eaglets, hatchlings, calves, cubs, fawns, lambkins, piglets, joeys, tadpoles, and other living things." Their efforts were to no avail, however, and the day of the big race soon arrived. The Race!! The air crackled with anticipation that morning as the crowds gathered at the starting gate. Vendors were there, selling chipatis, juices, and energy-supplement bars. Promoters were there, giving away phone cards, sports drinks, and cereal samples emblazoned with pictures of the tortoise and the hare. Newscasters and TV technicians were there, in droves of elaborate electronic vans, to exploit every last detail and image of "this story about the simplest of all challenges to race." Hardly anyone noticed when the tortoise arrived. He was so unassuming and free of ostentation that he blended in easily with the crowd. The serene look on his face was puzzling, considering the long odds he was up against. As you might expect, the arrival of the hare and his entourage could not be described as humble or restrained. It was hard to miss the long black limousine that edged its way through the crowd, or the cheers that erupted when the doors flew open and out stepped the hare, with a starlet on each arm and surrounded by four beefy bodyguards (or animal protection professionals, as they preferred to be called). ...read more.

The Result While such destructive merrymaking was deplorable (and certainly depended on many socio-economic influences), the most shocking part of the story was yet to come. Both racers did submit to urinalysis, and the results were not good for the tortoise, who was found to be a heavy user and abuser of steroids. The tortoise claimed that it was really the after-effect of an asthma medication, but the fox, in his role as Commissioner of Kinetic Wellness and Overland Velocity Contests, was forced to disqualify him and proclaim the hare as "finishing most fastest." In response to this scandalous news, fans of both the tortoise and the hare, as well as various bystanders and hangers-on, smashed shop windows, looted electronics and jewellery stores, overturned cars, and set fire to anything that was handy. This time the police arrested 115 animals for over-enthusiastic celebrating. It was soon decided that footraces, pawraces, hoofraces, and other such competitions only inflamed the animal populace and unleashed emotions that were not nurturing of public harmony. The fox resigned his position and was immediately named the new Facilitator of Constructive, Co-operative Kinetic Pastimes. His department heavily promoted participation in non-competitive activities such as snorkelling, water ballet, hackey sack, and duck-duck-goose (for any and all species). Further, he decreed any animal found to be competing with his or her neighbour in any type of sport or contest was to be disciplined with several hours of community service and forced to listen to audiotapes of the various sportscasters giving their analysis of the big race between the tortoise and the hare. ...read more.