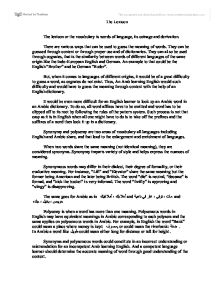 The lexicon or the vocabulary is words of language, its coinage and derivation.

The Lexicon The lexicon or the vocabulary is words of language, its coinage and derivation. There are various ways that can be used to guess the meaning of words. They can be guessed through context or through proper use and of dictionaries. They can also be used through cognates, that is the similarity between words of different languages of the same origin like the Indo-European English and German. An example to that could be the English "Brother" and he German "Buder". But, when it comes to languages of different origins, it would be of a great difficulty to guess a word, as cognates do not exist. ...read more.

Such process is not that easy as it is in English when all one might have to do is to take off the prefixes and the suffixes of a word then look it up in a dictionary. Synonymy and polysemy are two areas of vocabulary all languages including English and Arabic share, and that lead to the enlargement and enrichment of languages. When two words share the same meaning (not identical meaning), they are considered synonyms. Synonymy imparts variety of style and helps express the nuances of meaning. ...read more.

?? ? ???? ??? and ??? ? ???? ? ??? ?? ????? and ???? ? ???? ? ???? Polysemy is when a word has more than one meaning. Polysemous words in English may have equivalent meanings in Arabic corresponding to each polysem and the same applies on polysemous words in Arabic. For example, in English the word "Bank" could mean a place where money is kept:???? , or could mean the riverbank: ??? . In Arabic a word like ???? could mean either long for distance or tall for height. Synonyms and polysemous words could constitute in an incorrect understanding or mistranslation for an incompetent Arab learning English. And a competent language learner should determine the accurate meaning of word through good understanding of the context. ...read more.