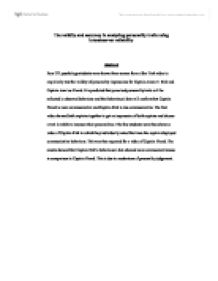 The validity and accuracy in analysing personality traits using interobserver reliability Abstract Four 211 psychology students were shown three scenes from a Star Trek video to empirically test the validity of personality impressions for Captain James T. Kirk and Captain Jean-luc Picard. It is predicted that perceived personality traits will be reflected in observed behaviour and that behavioural data will confirm that Captain Picard is more communicative and Captain Kirk is less communicative. The first video showed both captains together to get an impression of both captains and choose a trait in which to measure their personalities. The four students were then shown a video of Captain Kirk in which they individually noted the times the captain displayed communicative behaviour. This was then repeated for a video of Captain Picard. The results showed that Captain Kirk's behavioural data showed more communicativeness in comparison to Captain Picard. This is due to moderators of personality judgement. Introduction The validity and accuracy of analysing personality traits, through the observation of people's behaviour, has interested personality psychologists for years. In terms of this study, it is very important to understand the accuracy and validity in judgments, which can be illustrated by the moderators of accuracy and inter-rater reliability. ...read more.

The four participants chose 1) Number of times that a person demonstrates good listening by giving verbal responses that are appropriate and reasonable. 2) Number of times that a person uses explanations and clarifications. 3) Number of times that a person solicits the view of others. The four participants were then separated so our results could be collected independently. They then had to write in each coded behaviour down the side of the scoring sheet for Captain Kirk and again for Picard. The participants then watched the second Star trek scene featuring captain Kirk and had to make a tally next to the coded behaviour each time it occurred, this was again repeated for the third scene featuring Captain Picard. The participants each had to total the number of times the behaviour occurred for each coded behaviour First for Captain Kirk then for Captain Picard. The participants then joined back into the same groups and were instructed to record all the totals, so that each participant would have four totals for each coded behaviour. This was done for both Captain Kirk and Picard. The results were then analysed by each student, who had to calculate interobserver reliability and test the hypothesis. Discussion All the results gained by the group showed some degree of support for the hypothesis; it cannot be totally concluded from these results due to a number of confounding variables in this study. ...read more.