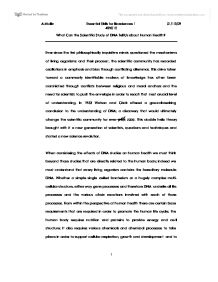 What Can the Scientific Study of DNA Tell Us about Human Health?

What Can the Scientific Study of DNA Tell Us about Human Health? Ever since the first philosophically inquisitive minds questioned the mechanisms of living organisms and their process', the scientific community has recorded oscillations in emphasis and bias through conflicting dilemmas. This drive taken toward a commonly identifiable nucleus of knowledge has often been constricted through conflicts between religious and moral anchors and the need for scientists to push the envelope in order to reach that next crucial level of understanding. In 1953 Watson and Crick offered a groundbreaking conclusion to the understanding of DNA; a discovery that would ultimately change the scientific community for ever (Pray, 2008). This double helix theory brought with it a new generation of scientists, questions and techniques and started a new science revolution. When considering the effects of DNA studies on human health we must think beyond those studies that are directly related to the human body; indeed we must understand that every living organism contains the hereditary molecule DNA. ...read more.

In their 2004 report, Diabetes UK estimated there are almost 3 million Type 1 Diabetes sufferers in the UK alone, with 5% of the global population diagnosed with Diabetes; a figure doubling every 3rd generation (www.diabetes.org, 2009). Recombinant DNA studies back in 1978 led to the in vitro synthesis of human DNA insulin (blog.targethealth.com, 2009), a naturally produced hormone and a key player within the human endocrine system. More recently there have been claims that through DNA studies and recombinant DNA research, a possible cure to infertility has been discovered. A laboratory in Newcastle, UK, has confirmed the synthesis of a fully functional sperm; grown in vitro from stem cells taken from a human embryo this announcement is the latest breakthrough in the fight against infertility. This treatment may possibly offer infertile males with a low or nil sperm count the chance to have artificial sperm grown from their own skin cells. Some may say that as far as human health is concerned where lays any benefit of such nature. ...read more.

Indeed the various DNA based studies that have taken place in order to understand and treat these highly successful bacterial strains that are to be attributed to the treatments available today. In order to understand a complex bacterium its hereditary material must be understood along with any effect this may have on the human immune system. This level of understanding requires the employment of DNA based studies and often the subsequent cloning of these bacterial DNA, coupled with some recombinant DNA research technology to manipulate DNA structures in order to find a key to any treatment. Of course there are always those in opposition to any studies of such nature; most moral judgements are religiously based and therein lay the basis for the majority of arguments. Although we must never lose sight of these counter arguments as they act to refocus public and scientific attention, the scientific and public communities are becoming more resilient toward the topics involved with DNA and genetic studies; this once dichotomous relationship appears to be finally unifying with the understanding that some steps are needed in order to improve human health. ...read more.