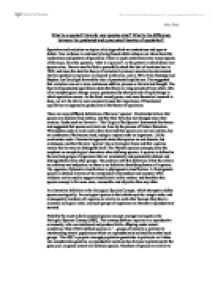 What is a species? How do new species arise? What is the difference between the graduated and punctuated theories of speciation?

What is a species? How do new species arise? What is the difference between the graduated and punctuated theories of speciation? Speciation and evolution are topics in biology which are contentious and open to debate. New evidence is continually being found which reshapes our ideas about the mechanisms and patterns of speciation. There is much controversy over many aspects of this topic, from the question, 'what is a species?', to the pattern in which these new species arise. Darwin was the first to powerfully attack the idea of creationalism in 1959, and since this date his theory of evolution by natural selection has dominated. Darwin sparked an explosion in research in this area, and in 1972, Niles Eldredge and Stephen Jay Gould put forward the idea of punctuated equilibrium. This suggested that evolution was not a slow continuous additive process as Darwin had thought. The theory of punctuated equilibrium states that there are long periods of time where little of no morphological change occurs, punctuated by short periods of rapid change in which speciation occurs. As the fossil record grows, and more theoretical research is done, we will be able to more accurately a***s the importance of Punctuated equilibrium as opposed to gradualism as the theory of speciation. There are many different definitions of the term 'species'. Creationists believe that species are discrete fixed entities, and that their form has not changed since their creation. ...read more.

It is likely that the founder population will have a gene pool which is not representative of the ancestral population, as it is likely that there is something distinct in that population which caused them to found a new population. Random chance will also cause bias in the selected gene pool. Adaptive radiation causes genetic divergence as the population isolated in the novel environment will be subjected to different selection pressures and therefore undergo rapid adaptation. Genetic divergence eventually causes reproductive isolation, as the two populations have diverged so much that they can no longer successfully interbreed. b) Sympatric speciation - this occurs without geographical isolation. Sympatric speciation is far less common than allopatric speciation, as gene flow is still possible between the two populations. There are two modes of sympatric speciation, the first of which is ecological speciation, whereby the population is not separated by a geographic barrier, but by an ecological one which prevents gene flow between the groups. For example, different forms of parasites of the same species may live and reproduce in different hosts, and there will therefore be no gene flow between the forms reproducing in different hosts. There is therefore assortive, rather than random mating. Due to the lack of gene flow, natural selection and genetic drift will eventually produce two reproductively isolated species. The second mode of sympatric speciation is strong disruptive selection. If the two extremes of a trait are strongly selected for, and the hybrids have reduced fitness, then successful reproduction between the two extremes will be reduced and gene flow will be minimal. ...read more.

Punctuated Equilibrium is more of an observation of evolution than a mechanism. It has been noted that adaptive radiations tend to occur following mass extinction events. For example, the extinction of Dinosaurs allowed the adaptive radiation of mammals. It is thought that the extinction freed ecological niches. Allowing mammals to diversify and fill these niches. The theory of punctuated equilibrium is an alternative to Darwin's (1959) belief that evolution was a slow, continuous and gradual process without sudden jumps. This theory is known as phyletic gradualism, and has been the widely accepted theory of evolution throughout the late 19th century and most of the 20th century. However, it was gradually realised that there was overwhelming evidence from the fossil record and theoretical studies that punctuated equilibrium is the foremost pattern in evolution. There is however, some fossil evidence supporting phyletic gradualism. One group of fossils which provides support for phyletic gradualism is the foraminifera fossils. By examining marine plankton fossils which appear in the Paleocene and extending 66 million years, Hunter et al. (1988) demonstrated a nearly continuous morphological change through time. However such evidence is scarce, and seems to be apparent in only a few taxa. Punctuated equilibrium seems to explain the jumps in morphological forms observed in the fossil record, and studies have provided evidence that evolutionary processes can and do incite this pattern. Although phyletic gradualism is evident, it is seen to only be important in a few taxa. The evolution of life has been shaped by both punctuated equilibrium and phyletic gradualism, but current data suggests that punctuated equilibrium plays a more significant role. ...read more.