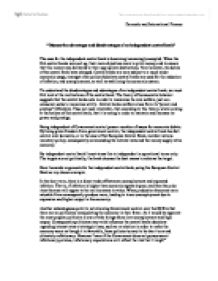 &amp;#147;Discuss the advantages and disadvantages of an independent central bank&amp;#148;

Economists have been scepticle about the advantages of an independent central bank when it comes to the business cycle. This research demonstrates "clear 'political business cycle', in which the economy is destabilised by the proximity of elections, and an equally clear mitigation of this cycle when an independent central bank takes monetary policy away from politicians".(www.res.org.uk) According to another version of the business cycle, the 'rational partisan theory', the economy is affected not by governments changing their policy as an election is coming up, but the private sector changing its behaviour in view of the uncertain result. Suppose your union is negotiating a wage deal to cover the next 12 months, but knows there is going to be an election halfway through. Suppose one of the parties likes monetary growth at 10% a year, while the other aims for 2%. Rational workers will hedge their bets and go for an intermediate pay rise say 6% as an example. Then if the more anti-inflationary of the parties gets in, you will have 6% pay rises colliding with 2% monetary growth: a rise in unemployment ensues. If the '10%' party wins, then, by equal and opposite reasoning, it starts its term with a boom. Analysis of 20 countries over the period 1960-98 Australia, Austria, Belgium, Canada, Denmark, Finland, France, Germany, Greece, Ireland, Italy, Japan, Netherlands, New Zealand, Norway, Spain, Sweden, Switzerland, the UK and the United States confirms this theory. ...read more.

If the central bank is put in charge of keeping down inflation the government will consider that controlling inflation is someone else's job. This means that the government can pursue expansionary fiscal policies, or other inflationary policies, without fearing that it will be blamed for the consequent inflation. The clearest example of this is the period of German unification after the fall of the Berlin Wall. The government pursued German unification and a large budget deficit, while the Bundesbank was expected to keep down inflation. The consequence of this argument is that, given that many policies which cause inflation are popular apart from their inflationary consequences, since the consequent inflation can be blamed on someone else an inflationary bias is introduced into the system precisely by having an independent central bank. That is, having an independent central bank leaves the government an incentive to pursue inflationary policies. In conclusion I feel I have set out a balanced piece, demonstrating both the advantages and disadvantages of a system such as the ECB. Both arguments have merit to them, but after looking at the research I feel that the successful conclusion for this debate is to implement independent central banks as the power to spend money should most definetly be taken away from the power to create and control it. ...read more.