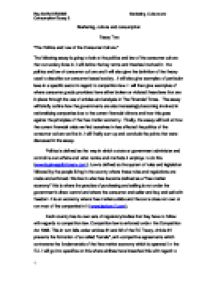 The Politics and Law of the Consumer Culture. I will define the key terms and theories involved in the politics and law of consumer culture and I will also give the definition of the theory used to describe our consumer based society. I

Marketing, culture and consumption Essay Two "The Politics and Law of the Consumer Culture" The following essay is going to look at the politics and law of the consumer culture that our society lives in. I will define the key terms and theories involved in the politics and law of consumer culture and I will also give the definition of the theory used to describe our consumer based society. It will also give examples of particular laws in a specific sector in regard to competition law. I will then give examples of where consumer goods providers have either broken or violated these laws that are in place through the use of articles and analysis in The Financial Times. The essay will briefly outline how the governments are also increasingly becoming involved in nationalising companies due to the current financial climate and how this goes against the principles of the free market economy. Finally, the essay will look at how the current financial crisis we find ourselves in has affected the politics of the consumer culture we live in. I will finally sum up and conclude the points that were discussed in the essay. Politics is defined as the way in which a state or government administer and control its own affairs and what tactics and methods it employs to do this (www.businessdictionary.com). ...read more.

In the airline industry recently there was a case of so called "cargo cartels" where by up to thirty major airlines from around the world were suspected of price fixing on cargo flights. Some big hitters in the industry were found guilty of this and most recently British Airways was fined for its part in this in Canada (FT, 01/11/09, P22, "BA fined �2.5m for Canada Cartel role"). Anti-competitive agreements are another breach of article 81 where companies can end up preventing or restricting competition often through price fixing. Article 82 has been brought up in recent times on various occasions and this across businesses in different areas. For example, British Airways are looking at merging with the Spanish carrier Iberia and American Airlines, but the EC has expressed concern that they would harm competition amongst airlines by having almost total domination of the London Heathrow-New York air routes that are regarded in the industry as very lucrative (FT 26/10/09, P1, "antitrust threat to Atlantic air tie-up"). The counter against this concern though, is that these three airlines are huge employers worldwide and the merger is seen as a life saver for the three companies after they all posted record losses in the recent financial year. If it was blocked on competition concerns, the loss of jobs by any one of them collapsing would be catastrophic (FT, 26/10/09, P.27, "Air alliance runs into turbulence over Brussels' concerns"). ...read more.

The fact that they are enshrined in EU competition law and rigorously enforced is good for the consumer. The problem with these laws is proving where companies have violated them as they are always most certain to launch appeals when they are found to be in violation and this is a protracted and long legal process. With regards to enforcement in the various sectors by the different regulatory bodies, this is a good thing also. The fact there are bodies specific to each sector ensures the people tasked with carrying out investigations and enforcement have the knowledge relevant to that sector and do not waste time studying a sector they have no idea about. Again though, it can work two ways, there are the arguments that there is too many public bodies that regulate in each sector and it can cause unnecessary confusion and bureaucracy. Political intervention is in direct contravention of the principles of the free market economy but is a necessary evil in some cases, especially in the current climate of the recession we find ourselves in. It saves jobs and ensures companies do not collapse. It is a double edged sword though. The government nationalisation of banks has led to less competitiveness and the excessive rules that have been proposed for the banking sector with regards to bonuses are potentially scaring away the most talented bankers. ...read more.