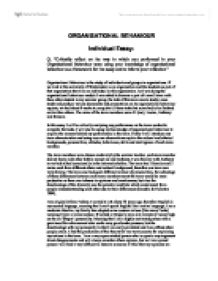 Critically reflect on the way in which you performed in your Organisational Behaviour team using your knowledge of organisational behaviour as a framework for the essay and to inform your reflection&quot;

ORGANISATIONAL BEHANIOUR Individual Essay: Q. "Critically reflect on the way in which you performed in your Organisational Behaviour team using your knowledge of organisational behaviour as a framework for the essay and to inform your reflection" Organisational Behaviour is the study of individuals and groups in organisations. If we look at the university of Westminster as an organisation and the students as part of that organisation that I am an individual in this organisation. As I was doing the organisational behaviour module I was asked to become a part of a small team with three other student in my seminar group, the task of this team was to study a case study and produce various documents and presentation on its organisational behaviour aspects, we had about 8 weeks to complete all these tasks but some had to be finished earlier than others. The name of the team members were Ali (me), Louisa, Anthony and Kalsum. In this essay I will be critically analysing my performance as the team worked to complete the tasks. I will also be using my knowledge of organisational behaviour to explain the reasons behind my performance in the team. Firstly I will introduce my team characteristics and using my own observations explain the cultural and ethnical backgrounds, personalities, attitudes, behaviours, skills and intelligence of each team member. ...read more.

The quality of work she produced was good but she was not a very good source of ideas. According to the theories about human learning (Bruner et al 1973), every individual learns differently, these differences arise from different personal factors such as personality, motivation, memory, cognitive awareness etc. people also learn differently to according to the nature of thing that is learnt. Our team came together for a short period of time (about 8 weeks), and none of us knew each others before, which meant that we could not learn each others learning styles therefore we could not relate to each other in the best way. According to Bruce Tuckman (1965) team go through difference stages of development, these are Forming, Storming, Norming, Performing and Adjourning. I think I could explain the development process of our team using Tuckman theory as the theory can accurately describe the processes in our team. In the forming stage which was when the team first came together since I didn't know most of the others in the team I behaved in a controlled and defensive manner, I was mainly silent in this stage but contributed only the essential ideas I thought was necessary, the storming stage started when the team was given the case study and everyone started realising what the team had to do, I observed the behaviour of other to what each individuals personality was like. ...read more.

According to this theory people's motivation levels are determined by; 'Valence' times 'Expectancy' times 'Instrumentality'. 'Valence' was the grade that I wanted to achieve (which was quiet high as I mentioned earlier), 'expectancy' was the confidence I had on myself and my team to actually receive that grade (which was also quiet high as the team initially looked focused and skilful and the 'instrumentality' was weather we would get the results we deserved which also scored very high as we all trusted the university marking system. Therefore according to the theory our initial motivation level should have been high which I agree with, but I also thing our motivation level decreased as the team progressed further in time. I can explain this using the expectancy theory; 'Instrumentality' stayed high as the trust in the system didn't change, 'Valence' also stayed high as our desires to get a high grade also stayed unaffected, but 'Expectancy' decreased as we started doubting the ability of the team to work together and produce the required results (due to the conflict's and problems in the team) which affected everybody's motivation level. REFERENCE - Organisation Behaviour: Introduction text, 5th Edition, David Buchanan, Andrzed Huczynski, Prentice Hull 2004 - Business Psychology & Organisational Behaviour: A students' Handbook 2nd Edition, Eugene McKenna, LEA Publishers 1994 - http://www.belbin.com/belbin-team-roles.htm 5-01-2005 - http://www.catalystonline.com/parts/thinking/tuckmans.html 5-01-2005 - http://www.geocities.com/Athens/Forum/1650/htmlgroups06.html 5-01-2005 - http://www.newcastle.edu.au/weblearn/gsbs6020/outline.html 5-01-2005 - http://www.weball.org/D1Organisational_behaviour.htm 5-01-2005 - http://www.findarticles.com/p/articles/mi_m2405/is_n3_v120/ai_15204658 5-01-2005 ?? ?? ?? ?? 1 ...read more.