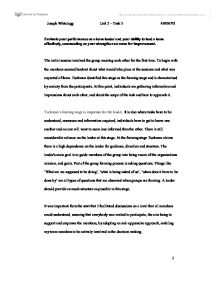 Evaluate your performance as a team leader and your ability to lead a team effectively, commenting on your strengths and areas for improvement.

Evaluate your performance as a team leader and your ability to lead a team effectively, commenting on your strengths and areas for improvement. The initial session involved the group meeting each other for the first time. To begin with the members seemed hesitant about what would take place at the sessions and what was expected of them. Tuckman identified this stage as the forming stage and is characterised by anxiety from the participants. At this point, individuals are gathering information and impressions about each other, and about the scope of the task and how to approach it. Tuckman's forming stage is important for the leader. It is also where tasks have to be understood, resources and information acquired, individuals have to get to know one another and no one will want to seem less informed than the other. There is still considerable reliance on the leader at this stage. At the forming stage Tuckman claims there is a high dependence on the leader for guidance, direction and structure. The leader's main goal is to guide members of the group into being aware of the organisations mission, and goals. Part of the group forming process is asking questions. Things like 'What are we supposed to be doing', 'what is being asked of us', 'when does it have to be done by' are all types of questions that are observed when groups are forming. ...read more.

I believe that this worked successfully because when the task strayed, I got the group back into the swing of things without the need to become more autocratic or aggressive. I also gave encouragement to the team to compete with the other teams attempting the task and there seemed to be was a healthy level of competition within the group. Because I was interacting with a group of five, I sometimes found myself interrupting their work upon noticing that the task was not moving on as effectively as I thought it could. I felt that I may have appeared to be a little rude at one point and maybe at times gave the impression that some member's opinions were not as valued as others. In retrospect this could have had serious consequences to team members feeling that they were not valued and therefore they would become angry and frustrated. This is something I will need to address for the next task. However I could argue that without my constant cajoling of the team, the project may never have progressed. And although I may have seemed relentless in keeping the other team members on track, I still attempted to maintain a positive relationship with them. My team was established by our programme leader, hence members were not chosen initially for their qualities and therefore there were a mixture of roles. ...read more.

Furthermore, as a result of my delegation of roles not all of the team were working together. Despite taking ownership of the project I should have seen that each member's ideas were accepted into the process. I also noted that my approach led to team members relying too heavily on my lead. In future I will attempt to shift some of the responsibility on to other team members. I could also have helped to ease the stress of other members by organising the project into smaller more manageable chunks. By focusing on smalls portions of the project at a time, the discussion would have been much more focused, allowing for a better understanding of each part of the process. 'You must make the conscious choice to accept the leadership role. It is not enough to occupy a position of leadership. In fact, many people have made the choice to lead, exercising vast influence, without being in a so-called "leadership" position. In making the choice to lead, you take responsibility for yourself first, which means you must commit to working on your own development. If you cannot, or will not, lead and develop yourself, you cannot lead and develop others. You must recognize that you will take some hits in your visible leadership role but you must also not shy away from them. You must realize that your decisions may not always be popular, but understand this comes with the territory. ...read more.