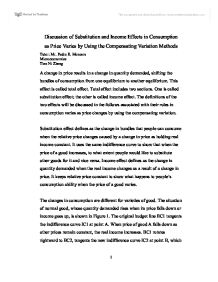 Discussion of Substitution and Income Effects in Consumption as Price Varies by Using the Compensating Variation Methods.

Discussion of Substitution and Income Effects in Consumption as Price Varies by Using the Compensating Variation Methods Tutor: Mr. Pedro E. Moncars Microeconomics Tian Ni Zhang A change in price results in a change in quantity demanded, shifting the bundles of consumption from one equilibrium to another equilibrium. This effect is called total effect. Total effect includes two sections. One is called substitution effect; the other is called income effect. The definitions of the two effects will be discussed in the follows associated with their roles in consumption varies as price changes by using the compensating variation. Substitution effect defines as the change in bundles that people can consume when the relative price changes caused by a change in price as holding real income constant. It uses the same indifference curve to show that when the price of a good increases, to what extent people would like to substitute other goods for it and vice versa. Income effect defines as the change in quantity demanded when the real income changes as a result of a change in price. ...read more.

The substitution effect is the movement from point A to point C on IC1. When compare BC2 and BC3, it can be seen that a decrease in price of A causes an increase in real income and a person's willing of consumption increases as well. The income effect is the shift from point C on IC1 to point B on IC2. When price rises, opposite changes happen in consumption. For an inferior good, its quantity demanded increases when price falls down or income decreases. As shown in Figure 2, when price of A decreases, the original BC1, which tangents to IC1 at point A, rotates rightward to BC2 and tangents to IC2 at a new point B. Use the compensating variation, BC2 is shifted rightward to touch IC1 at point C. For substitution effect, it shows the same result as in a normal good. The substitution effect is the movement from point A to point C along the same indifference curve IC1. As price of A decreases, the relative price of A drops, people contri-bute more money on the relative cheap good and cut expenditure on other relative expensive goods. ...read more.

So the total effect is a decrease in quantity demanded when price falls. From the previous discussion, it can be seen that for three kinds of good, substitution effect is always negative. Income effect is positive for normal goods but negative for both inferior goods and giffen goods. Furthermore, there is one exception where the substitution effect will lose its efficacy. It is when good A and other goods indicated in the graphs are "perfect complements". In that case, when the decrease in price of A leads to an increase in consumption of A, consumption of other goods will increase as well. There is another case where income effect will lose its efficacy. It occurs when good A and the other goods are all inferior goods or giffen goods. In that case, an increase in real income results from reduce of price will cause a reduction in consumption of all these goods. This means that BC2 should be on the left of BC3 and therefore tangents an IC3 which is lower than IC1. Reference: John P. Gould and Edward P. Lazear (1989) Ch 4. in Microeconomic Theory 1 ...read more.