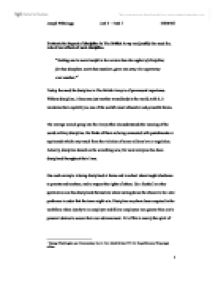 Evaluate the impact of discipline in The British Army and justify the need for, role of and effects of such discipline.

Evaluate the impact of discipline in The British Army and justify the need for, role of and effects of such discipline. "Nothing can be more hurtful to the service than the neglect of discipline; for that discipline, more than numbers, gives one army the superiority over another."1 Today, the need for discipline in The British Army is of paramount importance. Without discipline, it becomes just another armed body in the world; with it, it maintains their capability as one of the world's most influential and powerful forces. The average recruit going into the Army often misunderstands the meaning of the words military discipline. He thinks of them as being connected with punishments or reprimands which may result from the violation of some military law or regulation. Actually, discipline should not be something new, for most everyone has been disciplined throughout their lives. One such example is being disciplined at home and in school when taught obedience to parents and teachers, and to respect the rights of others. On a football or other sports team one has disciplined themselves when turning down the chance to be a star performer in order that the team might win. Discipline may have been acquired in the workforce when loyalty to an employer and fellow employees was greater than one's personal desires to secure their own advancement. ...read more.

Why do rifles have to be carried at just the same angle; why do you have to keep accurately in line; why must your bed be made in a certain way; why must your uniform and equipment be in a prescribed order at all times; why must all officers be saluted with snap and precision? These things are a part of their disciplinary training. Their purpose is to teach obedience, loyalty, team play, personal pride, pride in the unit, respect for the rights of others and the will to win. Being disciplined does not necessarily mean that one is being punished. It is to teach to place the task of a unit, or team, above one's personal welfare; that one is learning to obey promptly and cheerfully the orders of their officers and NCOs so that even when they are not present orders will be carried out to the very best of their abilities. Upon learning these rigmaroles and prompt and cheerful obedience has become second nature, a soldier is then deemed to have acquired military discipline; the kind of discipline which will save lives and win battles. As outlined in The Armed Forces Discipline Act 2000 the impact of disciplinary military sanctions may sometimes conflict with international humanitarian law. This depends on: 'the extent to which the principles governing that law have been integrated into the disciplinary rules of the armed forces and the range ...read more.

There can be no hesitation. Determined, swift action is required. Of course, there is always the consideration of the character of the person whose behaviour is being corrected, not to mention the welfare of the unit but the sooner it is dealt with; the sooner it allows everyone to put the event behind and get on with their responsibilities. It also lets everyone know that standards are enforced. Military discipline requires an eye toward rehabilitation of the transgressor. The hope is to make the person a better soldier. If possible, an officer will always want to reintegrate the person back into the fold. If that does not work and the decline continues, then the soldier needs to return to the civilian world. It is that simple. Every chance should be given to soldiers to rectify most errors they have made and help them achieve success; however, an overabundance of time and effort should not be spent with problem subordinates. It takes time away from valuable members of the unit and their mission. Disciplinary action taken by an officer should be based upon several factors: fairness, speed, and rehabilitation. Each is interconnected and each is ineffectual if considered alone. Furthermore, soldiers are more accustomed to respect officers who fairly and consistently enforce standards and apply justified discipline. While discipline is never fun to do, its neglect can have disastrous effects on military readiness and effectiveness. Discipline has been part of The British Army fabric since its beginning, and it truly sets them apart. ...read more.