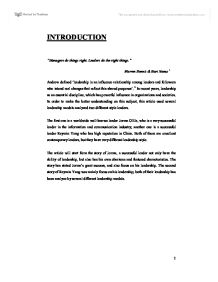 INTRODUCTION "Managers do things right. Leaders do the right things." Warren Bennis & Burt Nanus 1 Andrew defined 'leadership is an influence relationship among leaders and followers who intend real changes that reflect this shared purposes'. 2 In recent years, leadership as an essential discipline, which has powerful influence in organizations and societies. In order to make the better understanding on this subject, this article used several leadership models analyzed two different style leaders. The first one is a worldwide well-known leader Jorma Ollila, who is a very successful leader in the information and communication industry; another one is a successful leader Reymin Yang who has high reputation in China. Both of them are excellent contemporary leaders, but they have very different leadership style. The article will start from the story of Jorma, a successful leader not only have the ability of leadership, but also has his own charisma and featured characteristics. The story has stated Jorma's great success, and also focus on his leadership. The second story of Reymin Yang was mainly focus on his leadership; both of their leadership has been analyze by several different leadership models. ...read more.

By applying the 360-Degree Feedback analysis, we can see that Jorma is a successful charming leader, who has achieved a high level of self-knowledge. He has the ability to movitate his employees, and very persistence on his career. He owns plenty leaderships, he know is business very well, and set clear performance to the employees. Besides, he is respected in the worldwide. APPLYING OF PATH-GOAL THORY The Path-Goal Theory has a contingency perspective. But it is different from Fiedler's Contingent Theory in its focus. The Path-Goal Theory focuses on the situation and leader behavior rather than leader personality traits. The Path-Goal Theory believes that a leader can change a subordinate's expectancy by clarifying the paths between the subordinate's action and the outcome, which is the goal the employee wants to achieve. Whether leader behavior can do so effectively also depends on situational factors. It classified the leader behaviors into four types, they are:9 * Directive Leadership: The leader gives specific guidance of performance to subordinates. * Supportive Leadership: The leader is friendly and shows concern for the subordinates. * Participative Leadership: The leader consults with subordinates and considers their suggestions. ...read more.

Based on the findings of the Fiedler Model, Reymin's leadership performance is favorable. He would perform best in high control situations. Since I assumed the LPC score and I knew that contingent situations are difficult to assess, the reliability of this analysis is low. Nevertheless, it provides another viewpoint into Reymin Yang's leadership ability. Moreover, the path-goal theory also can be applied on Reymin's leadership analysis. Reymin is an Achievement-oriented leader. He set clear and challenging goals for employees, he is confident to perform high-quality performance and improvement over the current performance. CONCLUSION In conclusion, The process of accessing a person's leadership ability is a complex and often a difficult task; different leaders has different leadership style, there are many factors influence them on their leadership, such as the personal characteristics, the situation they have involved, and also the people need to manage, etc. Jorma have a very people-oriented style of leadership, he concern about his subordinate; conversely, Reymin is a more product-oriented leader, he paid big attention on the employees' task more them employee themselves. There many leadership models can be adopted to analyze those two leader, but there are three most suitable models have been adopted, whatever the models have been used, it is all exactly reflect Jorma and Reymin's personal leadership style. 1 ...read more.