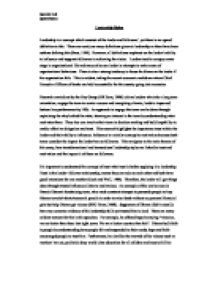 Leadership styles. Leaders tend to occupy centre stage in organisational life and many of us use leader in attempts to make sense of organisational behaviour. There is also a strong tendency to focus the blame on the leader if the organisation fails

Leadership Styles Leadership is a concept which consists of the leader and followers', yet there is no agreed definition to this. There are nearly as many definitions given to leadership as there have been authors defining this (Bass, 1990). However, all definitions emphasis on the leader's ability to influence and supports followers in achieving the vision. Leaders tend to occupy centre stage in organisational life and many of us use leader in attempts to make sense of organisational behaviour. There is also a strong tendency to focus the blame on the leader if the organisation fails. This is evident, taking the recent economic meltdown where Chief Executive Officers of banks are held accountable for the country going into recession. Research carried out by the Hay Group (HR Zone, 2008) claims leaders who take a long term orientation, engage the team to create a secure and energising climate; leads to improved bottom line performance by 30%. An approach to engage the team can be done through explaining the why behind the what, showing an interest in the team by understanding what motivates them. They also can involve their team in decision making and build capability to enable effective delegation and trust. This research highlights the importance trust within the leader and their ability to influence. Influence is a similar concept to motivation because both terms consider the impact the leader has on followers. This navigates to the main themes of this essay, how transformational and transactional leadership styles are linked to trust and motivation and the impact it of them on followers. It's important to understand the concept of trust what trust is before applying it to leadership. Trust in the leader- follower relationship; means they can rely on each other and both have good intensions for one another (Cook and Wall, 1980). Therefore, the leader will get things done through trusted influence (links to motivation). ...read more.

As a leader, it does not matter what product or service your company offers or what specific responsibility your team has; your job is to motivate and develop your employees by understanding their needs and rewarding them accordingly once goals are met (Jamail, 2009). Two types of motivations have been indentified, extrinsic (practiced by a transactional leaders) and intrinsic motivation (practiced by a transformational leaders). The former motivation is directly linked to an external/tangible reward such as money. The head of Merrill Lynch, Stan O'Neal, resigned after reporting heavy losses (BBC News, 2007). Does this mean, he was only extrinsically motivated by the salary and bonuses he received? Now, that the business is not doing well, there is not much chance for him to receive the attractive bonus, as a result decided to leave. Should managers encourage this form of motivation? Or did he leave because he did not want to take ownership of the errors made, hence the bank not doing well? Despite who made the mistakes, a transformational leader will take responsibility of them because he feels the followers belong to him, but a transactional leader will not. Evidently, extrinsic motivation only has short term benefits and costly to the organisation. Intrinsic motivation is not linked to any apparent rewards except the enjoyment activity itself, e.g. satisfaction of achieving goals, verbal praise and encouragement from leader (Yulk, 2006). This form of motivation is future orientated and perhaps less costly for the organisation. However, model of agency theory claims introducing extrinsic incentives cannot lower effort levels (Kreps, 1997). Without extrinsic incentives, why would a worker expend any effort? It's hard to imagine an employment situation without any extrinsic incentives. Perhaps, motivation depends on the nature of work and leader may have little impact. For example, call centres are highly performance orientated, target driven and based on bonuses. As a result, employees are more likely to be extrinsically motivated. ...read more.

expectancy theory. People in different cultures are motivated by different things. For example, in emerging markets such as India and China, people are motivated by pay, where as in developed countries employees are motivated by training practices, praise and promotion. Therefore, leaders in China should perhaps take a performance orientated approach and ensure equality with pay and tangible rewards. However, a leader in the UK should be focused on performance appraisals and development orientated with constructive feedback. In addition, Hofstedes (1980) research on cross cultural dimensions proposes there is a difference in power and status acceptance among people-power distance. For example, countries in high power distance, India/Mexico prefer autocratic leader where there's a clear distinction between management and employee roles. Employees in countries that rank low on power distance, Sweden/ Israel prefer a consultative and participant management styles. There are also great differences between collectivistic and individual cultures. These differences emphasize, there is not one best leadership approach, the leaders ability to be flexible is pivotal. Hollander (1993) reminds, without follower there is no leader. Therefore, leaders should respond to needs of followers to ensure they are motivated to achieve the vision. Trustworthiness, inspirational and communicative are behaviours and traits which are universally considered facilitators of leadership effectiveness (Javidan et al, 2006). This validates the importance and effectiveness of a transformational leader over the transactional leader, despite the culture. This is because he/she has the ability to emotionally and personally influence followers', provide rewards according to their needs which increase intrinsic motivate followers. Leadership means, having influence on followers and a dependable relationship, motivation reflects the ability to influence, evidently even the definition of leadership forces the need to motivate. People will only depend on another if there is an element of trust. Again, the concept of leadership indirectly means trust. DeNunzio (CEO of Asda) says, leaders take the job of people and make the extraordinary- that s what your job is about (Joyce, 2004). Gordon Ramsey (2007): "When you find a winner, groom it daily. Protect it with your life". ...read more.