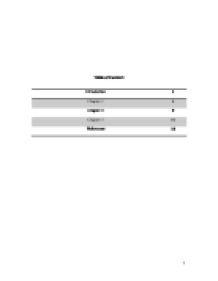 Table of Content: Introduction 3 Chapter 1 4 Chapter 2 9 Chapter 3 16 References 18 Introduction "Lonely Planet is the biggest travel guide book and digital media publisher in the world. The company is owned by BBC Worldwide, which bought a 75% share from the founders Maureen and Tony Wheeler in 2007 and the final 25% in February 2011. Initially called Lonely Planet Publications, the company changed its name to Lonely Planet in July 2009 to reflect its broad travel industry offering and the emphasis on digital products. After Let's Go Travel Guides, it was one of the first series of travel books aimed at backpackers and other low-cost travellers. As of 2010, it publishes about 500 titles in 8 languages, as well as TV programs, a magazine, mobile phone applications and websites." [Wheeler] Lonely Planet also having own television Production Company, which has produced numerous series like Lonely Planet Six Degrees, The Sport Traveller, Going Bush, Vintage New Zealand, Bluelist Australia and Lonely Planet: Roads Less Travelled. Lonely Planet placed its headquartered in Footscray, a suburb of Melbourne, Australia, with associate offices in London and Oakland, California. As of 2009, it was increasing its digital, online presence greatly. In 2009 Lonely Planet start publishing a monthly travel magazine called Lonely Planet Magazine in the UK, and in 2010 it launched the Indian and the Argentine editions. The company name comes from a misheard line in "Space Captain", a song written by Matthew Moore and first popularized by Joe Cocker and Leon Russell on the "Mad Dogs & Englishmen" tour in 1970. The actual words are "lovely planet", but Tony Wheeler heard "lonely planet" and liked it. Chapter 1 1.0 In what ways is Lonely Planet decentralized and / or centralized? Decentralized: Every one of Lonely Planet office is responsible for all sales and marketing efforts for its own region to address culture and other environment differences. ...read more.

There are also aids to decision-making, various techniques which help to make information clearer and better analysed, and to add numerical and objective precision to decision-making (where appropriate) to reduce the amount of subjectivity. Toney Wheeler can be trained to make better decisions. He also needs a supportive environment where they won't be unfairly criticised for making wrong decisions and will receive proper support from Maureen Wheeler. A climate of criticism and fear stifles risk-taking and creativity; Toney Wheeler will respond by 'playing it safe' to minimise the risk of criticism which diminishes the business' effectiveness in responding to market changes. It may also mean Toney Wheeler spend too much time trying to pass the blame around rather than getting on with running the business. Decision-making increasingly happens at all levels of a business of Lonely Planet. The Board of Directors may make the grand strategic decisions about investment and direction of future growth, and Wheeler may make the more strategic decisions about how their own department may contribute most effectively to the overall business objectives. But quite ordinary employees of Lonely Planet are increasingly expected to make decisions about the conduct of their own tasks, responses to customers and improvements to business practice. This needs careful recruitment and selection, good training, and enlightened management. Types of Business Decisions There can be categorised that few important types of business decision needed for Lonely Planet. The most popular decision is Programmed Decisions. These are standard decisions which always follow the same routine. As such, they can be written down into a series of fixed steps which anyone can follow. They could even be written as computer program. Non-Programmed Decisions are another common business decision. These are non-standard and non-routine. Each decision is not quite the same as any previous decision. Strategic Decisions can affect the long-term direction of the business, for instance, whether to take over Company A or Company B. ...read more.

Effective meetings share key elements such as an agenda, a facilitator and minutes that clearly outlines follow-up activities and assigns accountability for various tasks. Chapter 3: 3.0 In what ways does Lonely Planet achieve horizontal coordination across departments or offices? Lonely Planet applies reengineering approach to cut horizontally across the company and involve teams of employees working to give value directly to customers. Reengineering frequently involves a shift to a horizontal team based structure. All the employees on a particular process have easy access to one another so they can easily communicate and coordinate their efforts, provide value directly to customers and share knowledge. By using this way, Lonely Planet achieves horizontal coordination across departments. Business Process Reengineering Business process reengineering (BPR) is a computer science and management, an approach aiming at improvements by means of enriching efficiency and effectiveness of the business process that exist within and across organizations. The aim of BPR is for organizations to look at their business processes from a "clean slate" perspective and determine how they can best construct these processes to improve how they conduct business. [Michael Hammer] Business process reengineering is also called as BPR, Business Process Redesign, Business Transformation and Business Process Change Management. Reengineering is a primary rethinking and radical redesign of business processes to achieve dramatic improvements in cost, quality, speed, and service. BPR combines a strategy of promoting business innovation with a strategy of making major improvements to business processes so that a company can become a much stronger and more successful competitor in the marketplace. [Michael Hammer] Re-engineering is the source for many recent developments in management. The cross-functional team, for instance, has become popular because of the desire to re-engineer separate functional tasks into complete cross-functional processes. Also, many recent management information systems developments plan to integrate a wide number of business functions. Enterprise resource planning, supply chain management, knowledge management systems, groupware and collaborative systems, Human Resource Management Systems and customer relationship management systems all be obligated a debt to re-engineering theory. [James A. ...read more.