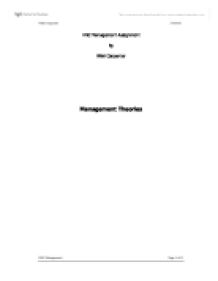 HNC Management Assignment By Vikki Carpenter Management Theories Terms of reference * Research and gather information on different management theories * Collate information and create a table of findings on approaches, highlighting differences * Relate findings to organisations, giving examples. * Evaluate procedures, search strategy and the effectiveness of using available resources * Make recommendations for improving research skills for future assignments The Research Management theories and approaches were researched and compared. To do this information was firstly sourced from a number of media's such as Internet web sites and management books. Information was then organised into the different theories and read before deciding what was to be used. Sources of information used are referenced below. I. http://www.managementhelp.org Very Brief History of Management Theories, written by Carter McNamara, PhD II. http://www.moray.ac.uk/pilot_files/evolution.htm The Evolution of Management and Organisational Behaviour (OB) III. http://www.accel-team.com/human_relations/index.html The Human Relations School of Management IV. http://faculty.ncwc.edu/toconnor/417/417lect06.htm The Systems Approach to Management (circa 1945 - 1975) V. http://www.utexas.edu/courses/speclass/courses/350/ppt/hrel350/tsld001.htm Human Relations Movement VI. Management and Organisational Behaviour 5th Edition (Prentice Hall) Laurie J Mullins When referring to these articles or web pages the numbers will appear on the left of text The Theories ( Classical Approach The classical approach to organisation, structure and management relies on formal structure, governed by rules and red tape. These structures are usually tall, with many layers of management. Decision-making is carried out at the top of the organisation and there is a hierarchy of management and control. ...read more.

Reward is not in cash payment but in doing challenging and difficult tasks by themselves. Managers then need to "dovetail" the human wish for self-development into the organisations need for maximum productive efficiency. Theory Z: This was a refreshing change from theory X. Freud's fellow psychologist, Abraham Maslow is the main founder of the humanistic school. His theory revolves around the meaning and significance of human work, as he believed all good qualities are inherent in people from birth. A mans personality is the sum total of his works and that only his works survive a man at death. This then became the essence of Maslow's hierarchy of needs theory. ( Contingency Theory Contingency can be defined as a chance happening of events, this being so the contingency theory states that there is no 'one best' design of organisation, or style of management and leadership. The type of structure, management style and 'success' of the organisation is dependent upon a range of situational variables. Fred Luthans advocated that this theory worked on the basis that certain practices work better than others for certain people and certain jobs. As an example, rigid, clearly defined jobs, authoritative leadership and tight controls lead in some cases to high productivity and satisfaction among workers. In some other cases just the opposite seems to work. It is necessary, therefore, to adapt the leadership style to that particular group of workers and the specific job in hand. ...read more.

Excellent motivator, follows idea that satisfaction will lead to productivity: " a happy worker is a productive worker" Informal. Based on idea economic ends most important and people who dislike work must be coerced, "stick and carrot" theory Informal. Based on idea that satisfaction from work is not only economic and people seek responsibility which can be a motivator Informal. Based on hierarchy of needs. Hard work and total commitment to doing a job well gives personal satisfaction and allows people to attain perfection they strive for Formal. Organisations should not seek one "right" way of doing things but consider situations and contextual factors, which influence management decisions. Holistic, moves away from internal focus Both formal and informal. Merge of many ideas from Scientific and Human relations. Project based and lends well to Gantt charts. Encourages managers to view Org' both as a whole & as part of large environment Informal. Extension of Contingency. Adapt leadership style to the particular group of workers and the specific job in hand. Alters rewards to what motivates individuals Criticisms Too inhumane Is a science of things not people Too concerned with worker satisfaction. Not much support to back theories, insufficiently scientific. Ignores role of organisation itself in how society operates Can be a de-motivator. Based on idea that people do not really want to work but do it because have to Can be to individualised and objective, team or organisational goal focused Not everyone wants to achieve self-actualisation, or needs to achieve at every level It ignores organisational politics. Emphasis on formal organisation. ...read more.