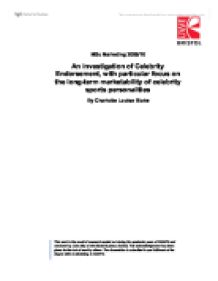 Marketing Dissertation. An investigation of Celebrity Endorsement, with particular focus on the long-term marketability of celebrity sports personalities

MSc Marketing 2008/10 An investigation of Celebrity Endorsement, with particular focus on the long-term marketability of celebrity sports personalities By Charlotte Louise Blake Confidentiality Statement The dissertation may be made freely available immediately for academic purposes. Charlotte L Blake, May 2010 Acknowledgments I would like to dedicate this work to my fianc�, Miguel Rodriguez, as if it wasn't for his support I would not have had the option of returning to university to pursue my ambition to get a masters degree, and change the direction of my career. I would also like to thank my family for their lifelong support; my father for always being the best source of advice, and my mother for always being there. Furthermore, I would like to pay my gratitude to John May for being a great lecturer throughout the year, and a good supervisor who always pointed me in the right direction. It is also imperative that I mention my classmates for the past 2 academic years, which have all proven to be a great bunch of people to be around, in and out of the classroom. Finally, thank you to everyone who participated in my research, I couldn't have done this without you. In particular Jessica Cole and Jessica Brittan, who not only participated in my focus groups, but also set them up, and hosted the events at their home. Whilst not forgetting, the legendary, Mel Stein, the only professional sports agent who agreed to spare his time for an interview with me, despite being laid up in a hospital bed. Thanks! Abstract Research and knowledge around celebrity endorsements is an area that many people have paid a lot of interest in, and as a result, is a topic of contemporary importance, academically. However, this is a subject that, when implemented in to the market place, can achieve heavy investment, and can reap heavy dividends for the practitioners, which is why it is a subject matter with great value. ...read more.

For this reason a set of questions based around achieving the research objectives were written before and used within the focus groups and the depth interview; giving the research more structure, and increasing its reliability. A university colleague was also asked to attend the focus ground, to act as a moderator, holding a position with duties to prompt the researcher to ask questions when necessary, keep the subject moving in times of need, and stop any bias. The sample used within this particular research project was largely represented by friends and family of the researcher. It could be claimed that using these people within the sample could limit the external validity and reliability of the research. The answers of these participants may represent a bias to their age, interest, and socio-economic class, as the focus groups were mainly made up of friend and family of the researcher, and therefore being a close match to the demographics of the researcher, as a result not being a fair reflection of the entire UK population. Also, by being friends and family members of the researcher could affect their responses, with a different interviewer different answers may have been given. However, it could also be argued that within familiar company, the participants felt more relaxed, and therefore felt more comfortable about giving honest answers. This could be argued either way, and with the time and cost constraints of the project the researcher felt that the sample used was sufficient enough to be considered a fair representation of the population. The researcher tried to over come these biases by supporting the findings from the focus group by conducting a survey. As the survey was conducted via the internet a bigger demographic could be reached. Reliability is the ability to reproduce consistent result should the same measurements be taken again. In this case time and cost proved to be large boundaries. ...read more.

The first is that he could be considered a 'legend' because of his contribution to English football. The second is that he is the host of a current football program (Match of the Day) that would attract an audience of a mixed aged, providing they had an interest in premiership football in the UK. Then on top of this Walkers has successfully used Lineker to deliver comical adverts that entertain the nation, not matter what their age. Objective 4: Identify the demographics of the consumers whose purchases are influenced by celebrity endorsement The findings in the survey showed that 71% of the population sample would at least consider purchasing a celebrity endorsed product. The graph on page 50 indicates a correlation between age and the desire to purchase celebrity endorsed products. According to this graph those within the younger age categories are more interested in purchasing celebrity endorsed products, the graph shows a peak in the 26-35 age category, suggesting that they are the most likely to purchase celebrity endorsed products. Research was also conducted to investigate the influence that celebrity endorsements has on those aged under 18 years old. The research tried to retrieve information about attitudes and opinions of this generation via their parents and/or grandparents. These results were deemed inconclusive, as they were very widely spread and gave no indication as to what their relationship was with endorsements. These results can be seen in tables 10 and 11, on page 58. The participants within the focus groups were all within the ages of 18 and 31, which limits the investigation in to demographics. All of the participants showed an interest in celebrity endorsed products, but it would be ignorant to assume that they could answer of behalf of the population. 5. Recommendations Although this research was primarily exploratory and further research would need to be conducted in this subject area, some recommendations have been made which could be sought to aid marketers currently in, or looking to going in to the sports celebrity endorsement industry. ...read more.