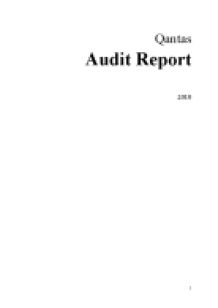 ﻿Qantas Audit Report 2010 Executive Summary This audit report analyses and evaluates the present performance and strategies implemented by Qantas Airways Ltd. This report also provides suggested recommendations to improve the current strategies used by the company. The appendices include graphs, tables and images that support the findings and recommendations discussed in the report. The relevant market comprises of the internal environment factors which affect the organisation?s ability to serve their customers (company, customers, suppliers and competitors) and external environment which affects the factors of the direct environment (economic, technological, political, legal, and cultural and social environment. In addition, the competitive situation analysis shows that Qantas has the upper hand in competitive advantage within the market. Being a long term participant, their brand power alone is renown and its competitors are faced with high barriers to entry. The SWOT analysis reveals Qantas should capitalise strengths, take advantage of opportunities, avoid threats and address the weaknesses. To accompany this, Qantas is situated on the borderline of growth and no growth on the GE grid with high business strength and low industry attractiveness. Qantas? market research requirements can be improved through more effective marketing strategies such as online surveys for Frequent Flyer members to establish destinations of interest they would like to be offered and an opportunity to provide suggestions, and observational research to recognise appropriate times to offer holiday packages or sale prices due to peak and inter-peak times to fly. Consumer behaviour issues have given rise to purchasing decisions from their current customers. People are influenced by the price, there are ?price-sensitive? customers who only want cheaper airfares. Natural disasters and epidemics also influence the flight services for Qantas. Qantas should aim towards a wider range of customers. Qantas? primary target segments are domestic business and international business travellers. The reason for selecting these segments to target is because of psychographic factors. Corporate travellers are likely to be willing to spend more on the luxuries. ...read more.

They acknowledged that the price was worth their value for money because of all the extra entertainment, etc included. There was a trial for celebrities, faces of Qantas all tested it out, and advertised what they thought of the new airbus.[40] Qantas sales increased as more travellers desired to become a passenger on the airbus. Their subsidiary airline carrier Jetstar, delivers services to different destinations at a lower cost. The two brand strategy grants Qantas unique strength for networking, scaling and customer communication. Qantas still remains Australia?s carriers of choice for premium and corporate travellers. In 2010, Qantas won The Chicago Anthenaeum?s Annual Good Design Awards for their design of the Qantas A380 First Class Suite.[41] It is the second award, since the Qantas A380 Economy Seat won the previous year called the Australian International Design Award of the Year. It boasts fourteen luxurious private suites with sofas that become a wide, long and flat bed. This shows customers that Qantas hopes to achieve the best services for their customers, and want them to enjoy a pleasant journey.[42] ?I still call Australia home? is another one of Qantas? brand campaigns which has an emotional appeal as it gives Australians a sense of pride and belonging to the Australian society. With the choir advertisement, started in 1997, marketing manager Geoff Dixon flew them all around the world to sing the song ?I still call Australia home.? During the Olympics, this advertisement was played on TV continuously, engaging people all over the world portraying Australia as a home to all Australians. Pricing Strategy Qantas? is a profit orientated company in that, it aims to maximise profits by offering high quality services, increasing seating capacity available and by charging higher prices. They also utilise a premium strategy, whereby the quality of service is high and prices then follow suit. Internal and external factors can greatly affect the supply and demand of the airfares which can lead to price changes. ...read more.