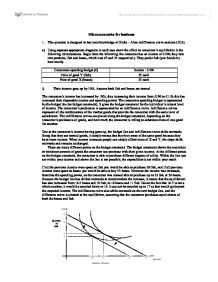 There is aggressive advertising campaign by fish sellers If there were aggressive advertising, it would encourage people to buy more fish; this would lead to an increase in the amount of fish sold and a decrease in the amount of beans sold. Also seeing that there is already a preference to fish, it will simply encourage more people to buy fish. The budget line consequently would not be affected, as the income effect or a price change only effects it. However, it will have an effect on the indifference curve. The new encouragement to consumers may move the difference curve away from the equilibrium and move slightly to the left, holding a greater preference towards fish. An exact figure cannot be given to where the curve will move, as we do not no how much a preference the consumer may hold. The consumer may convert to fish completely and not buy any beans at all, however we do not have exact figures, therefore we just have to go on the assumptions of the consumer demand theory. Which says increased advertising, if in light if the consumer's preference will move the indifference curve to satisfy the consumers needs. b) What are the weaknesses of the Hicks - Allen indifference curve analysis? The aim of the indifference curve analysis is to analyse how a rational consumer chooses between two goods, or how a change in wage rates will affect the choice between leisure time and work time. ...read more.

P stands for price and I stands for income. The income term allows the equation to shift parallel from the demand curve. Price and income are interdependent factors. There is also the issue of consistency. People may not be consistent in what they purchase. The indifference curve analysis assumes that a person's preference does not change. However for example if a person who split their income between fish and beans suddenly became a vegetarian, their preferences would be completely altered. The consumer will now only consume beans or may even turn to a substitute good. Another weakness of the indifference curve analysis is that it is assumed that the increase in the price of a good leads to a decrease in consumption. This is not true in all seen cases, as a price rise does not always lead to a decrease in consumption. There are other factors involved such as brand loyalty and 'snob' goods. The assumptions of brand loyalty are that although the price of a good may increase, their consumption of the good may not. They simply spend more of their income to buy more of the good, implying almost a loyalty to the good - brand loyalty. The concept of snob goods is similar. When the prices of some goods shoot up incredibly, for the example the price of a TV, demand may tend not to decrease. This is where consumers may have a preference to expensive goods, and tend to but goods in demand regardless of a price change. ...read more.