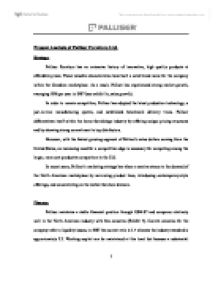 Present Analysis of Palliser Furniture Ltd. Strategy: Palliser Furniture has an extensive history of innovative, high quality products at affordable prices. These valuable characteristics have built a solid brand name for the company within the Canadian marketplace. As a result, Palliser has experienced strong market growth, averaging 18% per year in 1997 (see exhibit 1a; sales growth). In order to remain competitive, Palliser has adopted the latest production technology, a just-in-time manufacturing system, and established benchmark delivery times. Palliser differentiates itself within the home furnishings industry by offering unique pricing structures and by showing strong commitment to top distributors. However, with the fastest growing segment of Palliser's sales dollars coming from the United States, an increasing need for a competitive edge is necessary for competing among the larger, more cost productive competitors in the U.S. In recent years, Palliser's marketing strategy has taken a reactive stance to the demand of the North American marketplace by narrowing product lines, introducing contemporary-style offerings, and concentrating on the leather furniture division. Finance: Palliser maintains a stable financial position through 1996-97 and compares relatively well in the North American industry with few concerns (Exhibit 5). Current concerns for the company refer to liquidity issues; in 1997 the current ratio is 1.4 whereas the industry standard is approximately 3.2. Working capital can be maintained at this level but because a substantial portion of current assets is inventory, which is not considered highly liquid, it becomes a concern. However, since the times interest earned ratio is fairly high (4.1), the company demonstrates the ability to pay interest on assumed debt with substantial leeway in earnings before being unable to make payments. In addition, the times interest earned ratio is an important indicator of the company's ability to secure financing; Palliser is in good standing to undergo capital investments. In the future, the company may be advised to consider increasing cash on hand in the event of emergency. ...read more.

Tariffs on shipping items across the Mexican border can increase costs. Also, border crossing can lead to big delays in the shipment of goods. Palliser will have to overcome the threat of unionization. According to Mexico's federal law, if a minimum of 20 employees in a given company decided to form a union, Palliser would be required to recognize it. Although companies are not required to have unions, in practice union organizers from outside the company will often work with company employees to organize a union or recruit them to affiliate with outside unions. This is a threat that Palliser will undoubtedly come across when it opens up a manufacturing plant in Saltillo. The Mexican work culture will strike if they feel that they are not receiving the benefits that they hope. This could lead to major problems if Palliser invests considerable amounts of money in human resource training only to find discontent workers leave to work for other companies, or even their competitors. As well, the Mexican culture is highly nuptial, meaning that family is core to their values. Palliser must address this threat by offering a slightly higher wage to employees and create an atmosphere, which is highly commitment and family oriented. Perhaps, inviting family members to work together will guarantee a nuptial feeling throughout organization. The Mexico plant alternative is expected to be a highly valuable opportunity for Palliser if it is accepted (see exhibit 7). The payback period for the capital investment is only 2.91 years, with profit margins from the plant increasing from 16% in Year 1 to 19.7% in Year 3 (see Exhibit 8). These high profit margins are largely due to the low labour costs, and the ability to get cheaper leather materials. Palliser can also expect an increase in Return on Assets (ROA) of the Mexican plant from 13.1% in Year 1 to 47% in Year 3. ...read more.

> Other competitors in the Mexican furniture industry: Segusino already employs 1,400 people in its factory, producing Rustic furniture, with sales of US$35 million in shipments throughout North America. > Although trade barriers have been lifted, historical attempts to move into the U.S have proved somewhat unsuccessful, despite one U.S manufacturing location that still remains. This is because established companies in the U.S are already dominant in their home markets. > Canadian Unionization: Because Palliser is the second largest employer in Manitoba; it is continually a target for union recruitment drives. > Weak Canadian currency: Canadian currency is low relative to the U.S dollar, resulting in reduced purchase power. > Knowledge of technology by workers when entering new market: There is a potential threat of new workers in Mexico not knowing the state of the art technology that Palliser would implement in the factory. This could present problems in the training aspect of new workers. > Political and economic unrest: The Mexican economy is highly unstable compared to Canadian or U.S. economies, and as such can present problems similar to the near collapse of Mexican banks, known as the Tequila Crisis, in 1994. > Local population rejecting products manufactured by large-scale furniture firm: The current furniture industry primarily consists of small firms employing less than 5 people. As such, the local population may have negative feelings toward big industry taking over small-scale operations. > Threat to Palliser World Trade: The decrease in the effectiveness as intermediaries between wholesalers and retailers has posed a threat to this aspect of the firm. It has become increasingly difficult to remain as a pure trading business in China, and Asian manufacturers were a force to be reckoned with. Palliser Furniture's Distinctive Competencies It is through these distinctive competencies that Palliser will be able to break easily into new markets, and continue its successes with the introduction of new products. Continuance in achieving new distinctive competencies will allow Palliser to add more value to its products, achieve more market leverage and margin performance in its future endeavours. > Product development. ...read more.