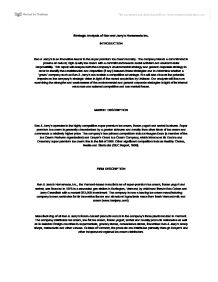 Strategic analysis of Ben &amp; Jerry's Icecream. This report will analyze both the companys environmental strategy and general corporate strategy in order to identify the consistencies and disparities (if any) between these strategies and to determine wh

Strategic Analysis of Ben and Jerry's Homemade Inc. INTRODUCTION Ben & Jerry's is an innovative leader in the super premium ice cream industry. The company blends a commitment to provide all natural, high quality ice cream with a commitment towards social activism and environmental responsibility. This report will analyze both the company's environmental strategy and general corporate strategy in order to identify the consistencies and disparities (if any) between these strategies and to determine whether a "green" company such as Ben & Jerry's can sustain a competitive advantage. We will also discuss the potential impacts on the company's strategic vision in light of the recent acquisition by Unilever. Our analysis will focus on examining the strengths and weaknesses of the environmental and general corporate strategies in light of its internal resources and external competitive and non-market forces. MARKET DESCRIPTION Ben & Jerry's operates in the highly competitive super premium ice cream, frozen yogurt and sorbet business. Super premium ice cream is generally characterized by a greater richness and density than other kinds of ice cream and commands a relatively higher price. The company's two primary competitors include Haagen-Dazs (a member of the Ice Cream Partners organization) and Dreyer's Grand Ice Cream Company, which introduced its Godiva and Dreamery super premium ice cream line in the fall of 1999. Other significant competitors include Healthy Choice, Nestle and Starbucks (SEC Report, 1999). FIRM DESCRIPTION Ben & Jerry's Homemade, Inc., the Vermont-based manufacturer of super-premium ice cream, frozen yogurt and sorbet, was founded in 1978 in a renovated gas station in Burlington, Vermont, by childhood friends Ben Cohen and Jerry Greenfield with a modest $12,000 investment. The company is now a leading ice cream manufacturing company known worldwide for its innovative flavors and all-natural ingredients made from fresh Vermont milk and cream (www.benjerry.com). Manufacturing of all Ben & Jerry's frozen dessert products occurs in the company's three plants located in Vermont. ...read more.

As part of the assessment process, Ben & Jerry's evaluates the environmental competencies of potential suppliers and considers this information when determining whether or not to do business. In addition, Ben & Jerry's only purchases dairy supplies from family farmers who pledge not to treat their cows with rBGH, because of the adverse effects it has on sustainable agriculture (ibid.). By working with its suppliers, Ben & Jerry's attempts to ensure that its environmental goals are shared throughout its supply chain. This leads to a more effective implementation of its overall strategy. STRATEGY ANALYSIS An analysis of the external and internal forces shaping the ice cream industry is necessary in order to determine the effectiveness of Ben & Jerry's current (and prospective) corporate and environmental strategies. We will utilize several analytical tools to characterize the strengths and liabilities of the industry and the effectiveness of the company's strategy, particularly through the use of the Five Forces Model of Competition, the Sixth (Non-Market) Force analysis, SWOT analysis, and the key factors of success. Five Forces Model of Competition In order to identify and assess the strength of external competitive forces on the ice cream industry we utilized a common analytical tool, Porter's Five Forces Model of Competition, which is based on the following five factors: rivalry among competing sellers, bargaining power of buyers, bargaining power of suppliers of key inputs, substitute products and potential new entrants to the market (Thomas and Strickland, 1995). Figure 3 summarizes the competitive strength of these forces on the ice cream industry. Rivalry Among Competing Sellers The principal competitors in the super-premium ice cream industry are large, diversified companies with significantly greater resources than Ben & Jerry's; the primary competitors include Dreyers and Haagen-Dazs. Rivalry can be characterized as intense, given that numerous competitors exist, the cost of switching to rival brands is low, and the sales-increasing tactics employed by Dreyers and other rivals threatens to boosts rivals' unit volume of production (SEC Report, 1999). ...read more.

Based on the nature of this agreement, Unilever is pledging to uphold Ben & Jerry's mission of integrating product quality with economic performance and social responsibility. Therefore, we do not expect that Ben & Jerry's environmental strategy will change, except that more innovations can possibly be made with the augmented financial and human resources. In addition, the social and environmental mission of the company will have the opportunity to be applied on a more global scale. As far as the preservation of the company's corporate strategy, Unilever's global presence and greater access to distribution channels will allow for Ben & Jerry's to continue to expand internationally, thus increasing market share, profitability, and competitive advantage. Potential threat to Ben & Jerry's success as a result of the Unilever acquisition are the negative public perception of the company (i.e. selling out), loss of consumer support and brand loyalty. This can be mitigated through marketing strategies geared towards alleviating public fears and ensuring that the underlying goals and policies of the company will remain intact. RECOMMENDATIONS & CONCLUSION Based on our analysis, we believe that the corporate and environmental strategies are appropriate and well integrated. While there are some disconnects between the two strategies, overall it is clear that the company strives to achieve economic success and environmental responsibility. Up to now, Ben & Jerry's has been successful at maintaining this balance. The primary concern is how well the company can insulate itself from future competition that could threaten its position as a leader in the super premium frozen dessert industry. In light of the threats identified in the SWOT analysis, we recommend that Ben & Jerry's implement the following suggestions: � Protect its public image in light of the recent acquisition by Unilever by maintaining its current position as a market-leader in environmentally and socially responsible business practices. � Continue cost-cutting efforts through implementation of further waste reduction, energy conservation, and recycling programs. Draft a formal written policy on energy use. ...read more.