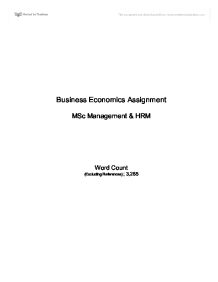 What principal-agent problems arise in organisations? How can they be overcome?

Business Economics Assignment MSc Management & HRM Word Count (Excluding References); 3,285 What principal-agent problems arise in organisations? How can they be overcome? Introduction The size and structure of many modern firms means that people, known as agents, are employed to carry out tasks and make decisions on behalf of principals (Strong & Waterson, 1987). The agent commonly has specialist knowledge and skills to carry out such tasks, and Sloman (2006) states that the existence of such relationships is evidence of increased specialisation and the division of labour in competitive firms. These relationships are known as principal-agent relationships, and Sloman (2006) claims they are prevalent among firms operating in today's complex economy, and pose a wide range of problems. The following paper aims to investigate the difficulties that arise on the back of principal-agent relationships, and analyse the effectiveness of various solutions that firms employ. In managerial economics the orthodox mainstream view of the firm is known as the neo-classical model, and Crew (1975) illustrates that one of the key assumptions underpinning the model is that firms aim to maximise profits and ultimately attempt to optimise performance. Taking into consideration the complexity of today's modern economy, the neo-classical model appears to display little resemblance to the reality of modern organisations. Crew (1975) describes how the mainstream view of the firm explores market relationships and relationships between organisations, but seems to ignore the internal structure of firms. This paper will therefore consider alternative theories of the firm that take into account the presence of internal relationships among modern organisations, and in particular will examine in depth the principal-agent problems that occur between shareholders and managers. Any problems that become apparent after studying the alternative models will then be investigated using empirical data. Solutions commonly adopted to overcome these problems will be scrutinized using empirical evidence also. The discussion will then briefly explore another principal-agent relationship, between employers and workers. ...read more.

Enron's downfall was that it's true financial position was not being represented accurately in its financial statements. Enron had huge debts from funding expansion plans, however officers at Enron were recording expected future profits as current profits in order to paint the picture of a highly profitable corporation. Ultimately when it was time to write off the debts it was revealed that Enron didn't have the revenue to cover them. On top of this senior managers at Enron were using the unpublished information to partake in insider trading for their own benefit. Although offering incentives can successfully align the interests of the agent with those of the principal, there are risks involved and these should be considered before designing an agents contract. The previous model assumes managers' sole objective will be to maximise revenue and the size of the firm, in order to experience the benefits of monetary rewards. Hall (1967) examined the sales revenue-maximisation theory by analysing how sales were affected by profits made above a desired level. After reviewing the results Hall (1967) concluded that his findings did not support the sales revenue-maximisation thesis, but also highlighted how they lent little support to the profit maximisation theory either. In fact Hall (1967) stated that there were many other additional variables, such as Williamson's expense preferences, that ate into profits above the desired level. In 1963 Williamson argued that a manager is concerned with a wide range of variables, not just one as proposed in the sales revenue-maximisation model. Williamson produced his managerial utility-maximisation model and Sloman (2006) describes how the model assumes that, provided profits are acceptable, managers will aim to maximise their own utility. Davies (1991) outlines how Williamson introduced the concept of 'expense preferences', which he described as unnecessary spending by managers on items that will personally benefit themselves, using the firm's profits. The four main areas that Williamson claimed affected a manager's utility were "salary, job security, dominance and professional excellence" (Sloman, 2006 p. ...read more.

The majority of the solutions examined involved attempting to align the interests of the two parties by offering monetary and share option incentives to the agent based on performance. On the whole this approach can be effective, as outlined by Margiotta & Miller (2000). However, reflecting on the work of Bruhl (2003), Cassano (2003) and the bankruptcy of Enron, a detailed share option system must be agreed as to eliminate the potential for insider trading by managers. Also the manager's incentives must be linked to the long-run performance of the firm, including after the manager has left, to ensure any future shortcomings that he may have known of but didn't disclose will effect his remunerations. On top of this, CEO and manager 'perks' should be disclosed and monitored to evaluate whether they are damaging the firms performance. Principal-agent problems operate within firms at all levels and another relationship studied in this paper is the relationship between employers and workers. The main problem observed in this relationship is that the employer cannot completely monitor his workforce, and so they are likely to 'shirk'. The employer has two real options to combat this, he can either increase the surveillance of his workers or he can pay his workforce efficiency wages above the equilibrium wage rate. Paying efficiency wages does inevitably throw the labour market out of equilibrium and cause unemployment. However this only exaggerates the incentive for workers not to 'shirk'. Shapiro & Stiglitz (1984) explain how monitoring employees effort is difficult and very costly, however employers should not just pay efficiency wages to every Tom, d**k and Harry in order to motivate them. When deciding on a solution, considering the nature of labour is crucial. Highly skilled workers who have undergone expensive training are costly to replace and therefore promoting loyalty and increasing their morale by paying them efficiency wages would be beneficial in the long run. However unskilled workers who conduct simple tasks are more easily monitored and therefore increasing surveillance is not that costly. Also the cost of labour turnover is much less and so workers can easily be replaced. ...read more.