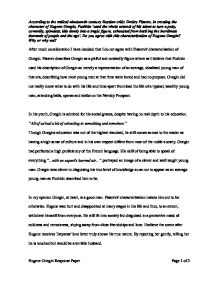 According to the radical nineteenth-century Russian critic Dmitry Pisarev, in creating the character of Eugene Onegin, Pushkin used the whole arsenal of his talent to turn a petty, cowardly, spineless, idle dandy into a tragic figure, exhausted fro

According to the radical nineteenth-century Russian critic Dmitry Pisarev, in creating the character of Eugene Onegin, Pushkin 'used the whole arsenal of his talent to turn a petty, cowardly, spineless, idle dandy into a tragic figure, exhausted from battling the inordinate demands of people and the age'. Do you agree with this characterisation of Eugene Onegin? Why or why not? After much consideration I have decided that I do not agree with Pisarevs' characterisation of Onegin. Pisarev describes Onegin as a pitiful and cowardly figure where as I believe that Pushkin used his description of Onegin as merely a representation of an average, idealized young man of that era, describing how most young men at that time were bored and had no purpose. ...read more.

portrayed an image of a clever and well taught young man. Onegin was clever in disguising his true level of knowledge so as not to appear as an average young man as Pushkin described him to be. In my opinion Onegin, at heart, is a good man. Pisarevs' characterization makes him out to be otherwise. Eugene was hurt and disappointed at many stages in his life and thus, to an extent, withdrew himself from everyone. He still fit into society but disguised in a protective mask of coldness and remoteness, shying away from close friendships and love. I believe the scene after Eugene receives Tatyanas' love letter truly shows his true nature. By rejecting her gently, telling her he is touched but would be a terrible husband. ...read more.

Furthermore Onegin breaches the etiquette by arriving late and being accompanied by a servant as his second. I understand this as resistance to the duel and an attempt to avoid it. Nevertheless Eugene has to go on with the duel. He shoots with great lassitude and sadness. I do not believe it is right to describe Onegin as a cold-blooded murderer or a tragic figure; he is merely a victim of a helplessly rigid society, locked in manners from which no one can find an escape. Student registration number : 7631469 Course code and title: RUSS10301 Ivan Goes to Hollywood Lecturer name : Dr Rachel Platonov Assignment title: Eugene Onegin response paper Word count: 519 Sources: Alexander S. Pushkin, Eugene Onegin: A Novel in Verse, trans. Vladimir Nabokov (Princeton: Princeton University Press, 1990), p. 97, 156. Eugene Onegin Response Paper Page 2 of 2 ...read more.