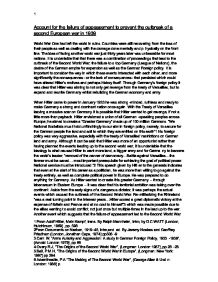 Account for the failure of appeasement to prevent the outbreak of a second European war in 1939 World War One had left the world in ruins. Countries were still recovering from the loss of their people as well as dealing with the damage done mentally and physically on the front line. The idea of facing another world war just thirty years later was unbearable for most nations. It is undeniable that that there was a combination of proceedings that lead to the outbreak of the Second World War; the failure to stop Germany (League of Nations), the desire of the German empire for expansion as well as the German Foreign policy. It is important to consider the way in which these events interacted with each other, and more significantly the consequences- or the lack of consequences- that persisted which could have altered Hitler's motives and perhaps history itself. Through Germany's foreign policy it was clear that Hitler was aiming to not only get revenge from the treaty of Versailles, but to expand and reunite Germany whilst rebuilding the German economy and army. When Hitler came to power in January 1933 he was strong-minded, ruthless and ready to make Germany a strong and dominant nation once again. ...read more.

Another event which suggests that the failure of appeasement led to the Second World War is the way in which Hitler obtained the Sudetenland and the rest of Czechoslovakia. Considering the Sudetenland primarily consisted of German-speaking people, it can be fair to say that it was not necessarily an act of aggression, but rather an effort to reunite Germany. However, this event proves significant in showing the allies desperation to avoid war. Avoiding war at any cost, to the point where the Munich Pact was decided by Britain, Czechoslovakia was not even invited to the meeting, "It [The Munich Pact] was not a very moral agreement, for it abandoned the Czechs rather summarily to n**i domination"4. Hitler had the edge in knowing that the allies would overturn their own treaty to keep Hitler's Germany at bay. Aware of this, he was able to plan further actions knowing there would be little consequences. This was demonstrated with the invasion of Czechoslovakia in 1939. Although it is impossible to single any particular event out as causing the war, it is possible that the n**i-Soviet Pact 1939 was perhaps the turning point for war as Britain and France were left with little choice but to give Hitler an ultimatum two days after invading Poland. ...read more.

Britain was openly breaking the Treaty of Versailles, inciting nations; in particular Germany and Italy; to see passed the League as being a threat - not what was intended. It is difficult to argue that any of the events discussed caused the war, nevertheless the consistent lack of threat the League of Nations showed meant that it was useless in terms of what it was set up to do, stop a war. The same could be said as well for Britain and France in the sense that they allowed Hitler to walk all over them, agreeing to pacts which put Germany in a better position whilst going against everything they had put in place post World War One. Irrespectively Hitler's ambition for lebensraum in Eastern Europe drove and essentially led up to the n**i-Soviet Pact, which in turn was the last action before war - not essentially the reason for the war. It is impossible to blame one event or one mistake for the war as Hitler's aims were relatively clear throughout his rein so it can be said that the amalgamation of these events is what lead to the war actually happening, not a consistent threat from the axis. ...read more.