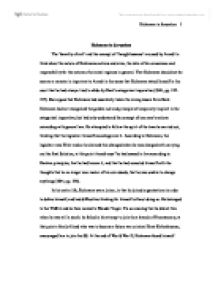 Eichmann in Jerusalem The 'banality of evil' and the concept of 'thoughtlessness' are used by Arendt to think about the nature of Eichmanns actions and aims, the state of his conscience and responsibility for the actions of criminal regimes in general. That Eichmann should not be seen as a monster is important to Arendt in the sense that Eichmann stated himself in the court that he had always tried to abide by Kant's categorical imperative (1964, pp. 135-137). She argues that Eichmann had essentially taken the wrong lesson from Kant: Eichmann had not recognized the golden rule and principle of reciprocity implicit in the categorical imperative, but had only understood the concept of one man's actions coinciding with general law. He attempted to follow the spirit of the laws he carried out, thinking that the legislator himself would approve it. According to Eichmann, the legislator was Hitler and so he claimed this changed when he was charged with carrying out the final Solution, at this point Arendt says "he had ceased to live according to Kantian principles, that he had known it, and that he had consoled himself with the thoughts that he no longer was master of his own deeds, that he was unable to change anything (1964, pp. ...read more.

Nevertheless, she recognizes in his defense a larger truth about the nature of responsibility in modernity: judgment and decision-making are always the responsibility of others, and thus, no one. Arendt is certainly interested in Eichmann's mechanism and notes that relatively few still knew right from wrong under the Nazi regime, or were prepared at least to act upon the innate pity that humans feel in the face of suffering. Arendt claims that the evil of Eichmann was his extreme careerism, which kept him focused on the monstrous and routine business of the Holocaust that rendered the lives of millions subservient to the utility of his prospects in the Nazi hierarchy (pp. 82). Eichmann's evil, lies not in some Augustinian stain upon his soul, but rather in his so-called normality, his exceptional attention to being nothing other than normal within even the most extreme circumstances. The judges in the case, were too good, and perhaps also too conscious of the very foundations of their profession, to admit that an average, normal person, neither feeble minded nor indoctrinated, nor cynical, could be perfectly incapable of telling right from wrong. ...read more.

But, whatever the perversity of his modes of thinking, Eichmann never lost the capacity to judge, to say what was and was not in accord with duty, even if his notion of the latter was tragically skewed. It is at this point that needs to be underscored. Critics of Arendt too often highlight her strong account of the rampant conformism of modern society and the crushing oblivion of Nazi totalitarianism to suggest that she believed that Eichmann bore no responsibility for his crimes that the usurpation of his practical reason by Hitler's edicts was inevitable given the time and place in which he lived. Arendt claims Eichmann is a symptom of a wider problem in modernity that needs to be thought, the way in which one's normal aversion to pity can be occluded through the mediation of new technologies and bureaucratic language rules. She worries that past is prologue in the Eichmann case, that it is quite conceivable that in the automated economy of a not to a distant future, men may be tempted to exterminate all those whose intelligence quotient is below a certain level (1964, pp. 289); what worries Arendt, then, is the continued privileging of the technical reasoning of the bureaucrat over the thinking and judging of practical reason. ...read more.