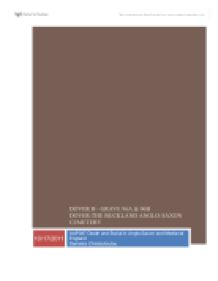 DOVER B - GRAVE 96A & 96B DOVER:THE BUCKLAND ANGLO-SAXON CEMETERY 10/17/2011 AAP387 Death and Burial in Anglo-Saxon and Medieval England Demetra Christodoulou This grave was discovered at Dover, Buckland cemetery1 and is dated at early Anglo-Saxon period. It's a double grave with the bodies placed side by side. The dimensions of the grave are: 7ft 6in X 3ft 9in X 1ft 2in, although the exact orientation is uncertain2. The grave was given two identification numbers 96a and 96b. The body that was found in grave 96a had an estimated age of death at over 40 years and was buried with a silver plated buckle loop with beveled surface, spearhead, knife, iron pin, sword, shield boss and a grip. ...read more.

The individual in Grave 96b had an estimated age of death between the ages of 20 and 30 years and was buried with a knife, a spearhead, an iron pin and a sword. The skull of the skeleton is at right position, both arms are straight with the hands on top of femurs and the right foot is crossed over the left one. Grave 96b was also identified as male by the grave goods despite the fact that the preliminary bone report was uncertain. ...read more.

Both skulls have also been positioned facing the same direction, looking down towards the right shoulder. It was suggested by Evison5 that both graves belonged to 'warriors of noble rank' (war equipment), possibly a homosexual couple, unlike to be a male and female warriors or couple. Accorded to the evidence of bone similarity there is the possibility that homosexuality was be socially acceptable to the Anglo-Saxons. For this reason, they allowed to commit this type of double burial. Unfortunately we cannot state clearly the sex and the events that led to this particular burial; we can only make suggestions, because it's a 'deviant burial' in all its forms. ...read more.