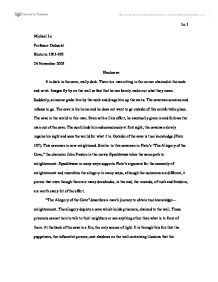 Michael Le Professor Dubuclet Rhetoric 1301-003 26 November 2003 Blackcave It is dark in the cave, really dark. There is a man sitting in the corner chained at the neck and wrist. Images fly by on the wall so fast that he can barely make out what they mean. Suddenly, someone grabs him by the neck and drags him up the stairs. The caveman screams and refuses to go. The cave is his home and he does not want to go outside of this comfortable place. The cave is the world to this man. Even with all his effort, he eventually gives in and follows the man out of the cave. The sun blinds him subconsciously at first sight; the caveman slowly regains his sight and sees the world for what it is. Outside of the cave is true knowledge (Plato 107). This caveman is now enlightened. Similar to this caveman in Plato's "The Allegory of the Cave," the character John Preston in the movie Equilibrium takes the same path to enlightenment. Equilibrium in many ways supports Plato's argument for the necessity of enlightenment and resembles the allegory in many ways; although the outcomes are different, it proves that even though there are many drawbacks, in the end, the rewards, of truth and freedom, are worth every bit of the effort. ...read more.

Preston finds himself unwilling and unable to turn back to the dreariness of his previous existence. This part of the movie is comparable to the caveman being freed from the chains and crawling out of the cave even though he does not want to leave the comfortable place that he is currently in. Preston realizes that a society without emotions is like a world without life. He leads the coalition to destroy the government and return emotions to society. Preston comes out of the cave and looks straight into the sunlight in search of freedom-just like the caveman in the allegory (Plato 107). Preston's passage to enlightenment, in Equilibrium, exhibits many elements that are similar to "The Allegory of the Cave." The film demonstrates some of his biggest challenges and how he overcomes it to reach enlightenment. Preston's biggest payment for enlightenment is his wife. Unlike Preston, his wife is already enlightened She could love, laugh, and cry; she could feel all the emotions that a normal human being could. Because of this, she was incinerated. They call her the sense offender, a crime that is destined for destruction. ...read more.

Blood shed everywhere in the street; destruction that was once abolished is now back and is stronger than ever. In spite of this, Libria regains its loving, caring, and all the emotions that make up a real human being. Enlightenment comes at a big cost and even though some may not agree with the price, it is required. Someone has to sacrifice in order for another to benefit. Many people sacrifice their lives in order to bring Preston into the light and help enlighten him. In the end, enlightenment is just like what Plato described, the ideal state that offers perfection, true knowledge and freedom. If knowledge is power, then enlightenment is the most powerful weapon if used correctly. With the power of enlightenment in their hands, the people of Libria destroy their government and regain their freedom. Preston proves that with the will and belief to better his life he can do anything. Plato's teaching encourages enlightenment and self-realization, to look outside of the box and seek your own path to enlightenment. In the end, both "The Allegory of the Cave," and Equilibrium teach a great lesson, to seek for the truth, whether through education or through the journey of life, and to use that knowledge wisely to advance in life. ...read more.