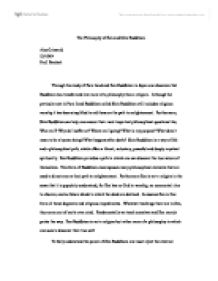 The Philosophy of Zen and Shin Buddhism

The Philosophy of Zen and Shin Buddhism Alec Griswold 12/15/04 Prof. Brackett Through the study of Pure Land and Zen Buddhism in Japan one discovers that Buddhism has transformed into more of a philosophy than a religion. Although the particular sect in Pure Land Buddhism called Shin Buddhism still includes religious worship it has been simplified to aid those on the path to enlightenment. Furthermore, Shin Buddhism can help one answer their most important philosophical questions like, Who am I? Why do I suffer so? Where am I going? What is my purpose? What does it mean to be a human being? What happens after death? Shin Buddhism is a way of life and a philosophical path, which offers a liberal, voluntary, peaceful and deeply mystical spirituality. Zen Buddhism provides a path in which one can discover the true nature of themselves. This form of Buddhism encompasses many philosophical elements that are used to direct one on their path to enlightenment. Furthermore Zen is not a religion in the sense that it is popularly understood; for Zen has no God to worship, no ceremonial rites to observe, and no future abode to which the dead are destined. ...read more.

To many this is a contradiction of the common law of moral life, however herein lies the truth and the life of Zen. It encompasses the spirit of a man and believes in its inner purity and goodness. Therefore, Zen is emphatically against all religious conventionalism. Meditation can be a useful tool in Zen Buddhism, however, it is different compared to other forms of meditation. To meditate, an individual has to fix their thought on something; for instance, on the oneness of God, or his infinite love, or on the impermanence of things. But this is the very thing Zen desires to avoid. If there is anything Zen strongly emphasizes it is the attainment of freedom; that is, freedom from all unnatural encumbrances. Therefore, when Zen Buddhists mediate they try to clear their mind of any thoughts and concentrate on the emptiness within the mind. Dogen, a pioneer of Zen Buddhism, explained the importance of sitting mediation without any thought of acquisition or attainment, or any specific problem in mind. Dogen stated that, "Just as the practice of sitting is not just a means to an end, but the realization of Buddhahood itself, so Buddhahood is realized constantly in life by selfless action and strenuous effort, with no thought of achieving and end apart from the means. ...read more.

In discussing Amida, Shinran stated, "in order that we may enter straight into the peaceful and eternal abode of Nirvana, it is necessary for us to receive the believing heart [of Amida] (de Bary, 339)." Like atheism, Shin Buddhism rejects the notion of a supreme personal God because it experiences a different vision of Ultimate Reality. Amida transcends the notion of a personal creator God who is dualistic, wrathful and judgmental (de Bary, 327). Much like Zen Buddhist, Shin Buddhists believe in and encounter a transcending mystery that is beyond the stories of mythology, which is the living experience of the unfolding nature of Life itself (de Bary, 341). Shin Buddhists faith experience (shinjin) is not about believing in a set of rules, creeds or ancient dogma but is a profound awakening that unfolds from within one's deepest core as a life transforming experience (de Bary, 333-334). Moreover one realizes that true faith is the awakening experience directed from Other Power unfolding within their bodies, minds and hearts. Both Zen and Shin Buddhism have religious aspects however they are better defined as forms of philosophy because of their assertion on discovering the unanswered questions of life through looking within. The philosophy of these sects of Buddhism allow its followers to find the true meaning of their existence and live life as it is meant to be lived. ...read more.