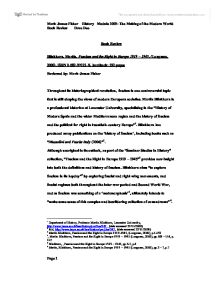 Book Review - Fascism and the Right in Europe

Book Review Blinkhorn, Martin, Fascism and the Right in Europe 1919 - 1945, (Longman, 2000), ISBN 0-582-07021-X, hardback: 192 pages Reviewed by: Mark-James Fisher Throughout its historiographical revolution, fascism is one controversial topic that is still shaping the views of modern European societies. Martin Blinkhorn is a professional historian at Lancaster University, specialising in the "History of Modern Spain and the wider Mediterranean region and the history of fascism and the political far right in twentieth-century Europe"1. Blinkhorn has produced many publications on the 'history of fascism', including books such as "Mussolini and Fascist Italy (2006)"2. Although unoriginal in its outlook, as part of the "Seminar Studies in History" collection, "Fascism and the Right in Europe 1919 - 1945"3 provides new insight into both the definitions and history of fascism. Blinkhorn aims "to explore fascism in its heyday"4 by exploring fascist and right-wing movements, and fascist regimes both throughout the inter-war period and Second World War, and as fascism was something of a 'metamorphosis'5, ultimately intends to "make some sense of this complex and bewildering collection of conundrums"6. Blinkhorn's historical judgement is conveyed in a well-structured manner because the chapters are divided into sub-sections. ...read more.

Blinkhorn conveys in the former chapter how different right-wing movements occurred between Inter-War Europe, in countries such as Italy, Germany, Romania, Bulgaria, Greece, Spain, Portugal, Britain and Ireland. He argues that although many of these movements gained "genuine mass support and political potency"14, it was only Mussolini's 'Italian Fascist Movement' and Hitler's 'German National Socialist Party' that had won "political power in what might be termed 'normal', that is to say peacetime conditions"15. These were then able to establish 'fascist' regimes. Blinkhorn effectively compares and contrasts the experiences of fascism within Italy and Germany, and hence uses this to reflect upon other right-wing movements and regimes within the Inter-War Period. Blinkhorn regards Fascist Italy as a "starting point and a model against which to examine other dictatorships of the political right, the Third Reich included"16. He agrees that fascism originated in Italy and this influenced n**i Germany and other right-wing movements, particularly, Sir Oswald Mosley's 'British Union of Fascists'17. However, although Blinkhorn agrees that Fascist Italy had influenced many other right-wing movements, he argues that "The Italian Fascist Regime was least 'fascist' than it appeared"18 because like other right-wing movements that were suppressed by establishments already in place, Mussolini's "constitutional position remained ultimately subordinate to the crown." ...read more.

Blinkhorn, in this chapter, puts forward a thoughtful viewpoint in helping us to understand how 'fascism' as an ideology is extremely complex. Blinkhorn, in "Fascism and the Right in Europe 1919 - 1945"27 has produced a short, yet very detailed book that brings new insight to the current historiography on fascism. It is an ideal text amongst academic students of fascism, who wish to actively engage with and understand its subject. Blinkhorn has effectively differentiated between the two major fascist regimes in Italy and Germany, and those less successful movements and regimes like Spain, Portugal, Bulgaria and Romania, whose 'fascist states' were born through the intervention of Fascist Italy and n**i Germany28. However, Blinkhorn has furthermore explored how Fascism in Italy and Germany were extremely different, the latter being more radical and exceeding the boundaries of 'fascism'. Blinkhorn's contribution to fascism's history raises questions for modern democracy. He fears that with the rise of more recent 'fascist' and 'national socialist' movements to prominence (like Austria's freedom party)29 "as a new century and a new millennium dawn, and as the memories of fascism's heyday recede, it would be dangerous to conclude that new versions of this menace will never re-appear to threaten the safety and the lives of minorities, and the safety of democracy"30. ...read more.