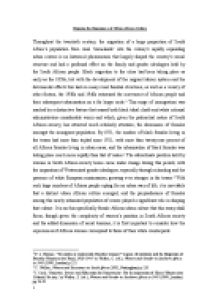 ﻿Examine the Emergence of Urban African Culture Throughout the twentieth century, the migration of a large proportion of South Africa?s population from rural ?homelands? into the colony?s rapidly expanding urban centres is an historical phenomenon that largely shaped the country?s social structure and had a profound effect on the family and gender ideologies held by the South African people. Black migration to the cities had been taking place as early as the 1850s, but with the development of the migrant labour system and the detrimental effects this had on many rural familial structures, as well as a variety of other factors, the 1930s and 1940s witnessed the movement of African people and their subsequent urbanisation on a far larger scale.[1] This surge of immigration was marked by a distinctive feature that caused both black tribal chiefs and white colonial administrators considerable worry and which, given the patriarchal nature of South African society, has attracted much scholarly attention; the dominance of females amongst the immigrant population. By 1951, the number of black females living in the towns had more than tripled since 1921, with more than twenty-one percent of all African females living in urban areas, and the urbanisation of black females was taking place much more rapidly than that of males.[2] The subordinate position held by women in South African society hence came under change during this period, with the imposition of Westernised gender ideologies, especially through schooling and the presence of white European missionaries, growing ever stronger in the towns.[3] With such large numbers of African people opting for an urban way of life, it is inevitable that a distinct urban African culture emerged, and the preponderance of females among this newly urbanised population of course played a significant role in shaping that culture. It is on this specifically female African urban culture that this essay shall focus, though given the complexity of women?s position in South African society and the added dimension of racial tensions, it is first important to consider how the experiences of African women correspond to those of their white counterparts. ...read more.

shebeens; ?illicit liquor dens? that became central to African social life in the towns, by the notorious shebeen queens who were well known in their day for being strong, commanding women.[35] During the first few decades of the twentieth century beer brewing provided a largely unchallenged source of income for newly urbanised African women, but with the amendment of the 1923 Urban Areas Act in 1937, compelling local authorities to establish municipal monopolies over the production and sale of beer, women?s already very limited access to making a living was severely threatened.[36] From this point on, a tumultuous and ongoing battle began between the police and the urban women, who were not prepared to let their independence go without a fight. With Judith Gay?s investigation into the economics of brewing in the 1970s revealing that women brewers could earn up to four times the amount of domestic servants, it is not surprising that the police faced a strong wall of resistance.[37] The fact that beer-brewing was now against the law had a pronounced effect on the African culture in the towns, with the centre of African social life and simple recreation now being classed as criminal activity. This development also affected the position of women in the towns, as now they were not only at threat from the attacks of drunken men, but were also under constant attack from the police and the authorities, who were often just as brutal towards the women as most township men, and who, according to Bernstein, were not unknown to sexually assault or even rape the women whom they arrested.[38] Once again, however, these strong women were not merely passive victims in these assaults on them and their incomes; female beer brewers, especially those from Basutoland, were widely regarded by both the authorities and the common townsmen as cleverer than the average African women for their abilities to dodge the police, manipulate the law and corrupt native constables.[39] Many shebeen queens had their own deals with the police, ...read more.

a fight, and that the culture in which they lived had instilled in them the confidence and independence to let this be known. Therefore it is clear that female African urban culture also had a distinct political edge that played a prominent role in many women?s lives. Throughout the twentieth century, then, increasing numbers of black women migrating to the South African towns made the development of an especially female African urban culture inevitable. As a result of the sexist, racist and elitist society in which they lived, African women were forced into illegal occupations, abusive relationships, gangsterism and political protest, as well as having either the threat or reality of sexual violence inflicted upon them on a frequent basis. All of these prescribed experiences combined with women?s own actions, such as joining women?s organisations, adapting rural songs and dances and engaging in political activity, to shape the urban culture in which African women lived. Westernised gender roles had a pronounced effect on this culture; through European missionaries? denunciation of the position of women in traditional African society and their ensuing mission to impose domestic ideologies, women who lived in the towns were in many ways simply transferred to a similarly oppressive position in an unfamiliar setting. The destruction of family structures, largely as a result of the migrant labour system, had the effect of relieving women from oppressive rural systems and encouraging their migration to the towns, where a sense of freedom and increased independence could be sought. Nothing was guaranteed, of course, and while some women immigrants may have enjoyed an increased standard of living relatively free from direct male control, this was certainly not the case for those harassed by the tsotsi or persecuted by the police. Therefore it is clear that female African urban culture emerged under a set of sometimes contradictory factors, and that it was ultimately the hugely sexist, racist and oppressive apartheid state under which they lived that shaped the culture of African women in the towns. ...read more.